Monkey
Tallulah is a character in Barbie as The Island Princess. She is a monkey from the South Seas, and she lives with Queen Danielle. Tallulah is voiced by Bets Malone.

When Ro and her animal friends are brought to the royal palace by Prince Antonio, they meet the royal couple, parents of Antonio, and Tallulah. Ro starts talking to Tallulah and makes Antonio's parents surprised. At the same moment, Antonio is presented to Princess Luciana.

At the scene when Ro is in royal stable, Tallulah visits her. Ro offers her a fruit, but Tallulah disagrees eating without a knife and fork, but then gives up: "Well, if you insist, just one". Then she remembers how she and her brother used to climb trees to get fruits. Ro shows her the quantity of fruits of branches and offers her to hold her tiara, so it won't fall off. Tallulah admits she'd forgotten how to climb, and Ro says she can fix that, so they begin to climb, and get noticed by Antonio and king Peter.

Later, Tallulah and Sagi are making Ro ready for the royal ball, singing At The Ball. At the ball, Tallulah is not seen, probably close to her owner, queen Danielle, but later, when rats are out to poison all the animals, Tallulah is seen sleeping in her bed; rats then poison bananas standing next to her bed.

At the next day, queen Danielle tells her husband she could not wake Tallulah up. Frazer then tells the royal couple about a horrible infection from the South Seas (made up by Ariana). The king decides to get Ro and her friends out of the prison where they'd been put earlier and get them out of his kingdom. Ro and her friends go back to the kingdom, to Antonio and Luciana's wedding, where Ro announces that someone put sleeping herb in animals' food, and says she can cure them. Sleeping Tallulah is brought to Ro, and she woke up  she heard what was happening that meant she knew Ro was in trouble. so she showed up to show everyone that ro was telling the truth, making queen Danielle happy.

Tallulah appears for the last time in the film on Rosella and Antonio's wedding, where she, along with Sagi, Tika and Azul sings a part of When We Have Love. It is also shown Tallulah and other animal friends were taken with Rosella and Antonio to their honeymoon journey.

Tallulah is a prissy monkey. She is pretty friendly. She is very civilized and wouldn't want to eat anything without a knife and fork. She's also got a sense of style, shown when she tries to dress Ro as the other girls. Her preferences for dressing are "dress, tight, less, bright, yes, white", according to "At The Ball" song.

Tallulah is a white tiny monkey with brown eyes. She wears a tiara with pink heart-shaped jewels, a necklace with the same jewel, and two bracelets, though all this jewellery might have been put on by Queen Danielle, her owner.

Ro and Tallulah climbing the tree 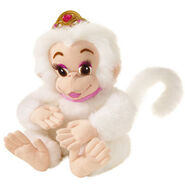 Add a photo to this gallery
Retrieved from "https://barbiemovies.fandom.com/wiki/Tallulah?oldid=136081"
Community content is available under CC-BY-SA unless otherwise noted.