Pimm is a little purple bat who appears in Barbie in the Nutcracker. He is a little bat who spies on the Nutcracker and his companions for the Mouse King. Pimm's personality can be described as timid, obnoxious, obedient, and slightly temperamental. He also has a high voice and a British (cockney) accent. He was impliedly more or less nicer before the events of the movie, but was more or less corrupted by the Mouse King. This is implied when the Mouse King said, "Very good, Pimm! I do believe I'm starting to rub off on you!" He is voiced by Peter Kelamis.

Pimm was Mouse King's servant. He is the first to spot Clara and the Nutcracker and he informs his master straight away (he is rewarded with fruit). He helps guide the Mouse's rock giant and informs him of any new developments in the Nutcracker's journey. He also tells the Mouse about the intended uprising of the Parthenians. After the Mouse shrinks, he rides on Pimm's back, but both of them are knocked out of the sky by a snowball thrown by the Peppermint Girl.

Pimm sitting with the Mouse King. 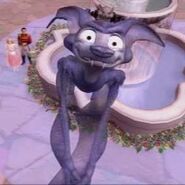 Pimm with the Mouse King
Add a photo to this gallery
Retrieved from "https://barbiemovies.fandom.com/wiki/Pimm?oldid=138972"
Community content is available under CC-BY-SA unless otherwise noted.