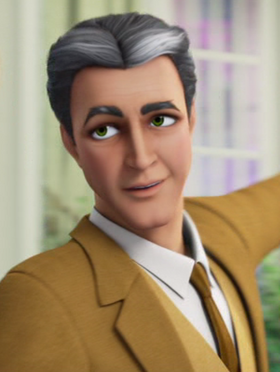 Mr. Primrose is a character in Barbie and the Secret Door. He is the royal dance instructor in Princess Alexa's kingdom. He tries his best to teach Alexa how to dance like a princess, but he ends up getting accidentally injured by her in the process. He is a rather sarcastic man and he's voiced by Jay Brazeau.

Primrose has light skin, gray and white hair, and green eyes. He wears a brown suit, waistcoat and tie, with a white shirt and dark brown shoes. He is later seen wearing a foot cast, caused by his injury.

Retrieved from "https://barbiemovies.fandom.com/wiki/Mr._Primrose?oldid=133057"
Community content is available under CC-BY-SA unless otherwise noted.