The Mansion is owned by a rich couple in Barbie & The Diamond Castle. It is located in the woods of where Liana and Alexa were travelling. After they could no longer walk, and were thirsty for a drink Liana spotted the mansion.

The girls were invited in by a rich couple, not knowing they were enchanted by Lydia's flute. The mansion was really a trap to capture Liana and Alexa so Lydia could get the mirror.

The girls were told about a legend where when two friends come across the mansion, needing aid were to be given the mansion to own for years and years. Liana left to go help Melody, but Alexa stayed since she gave up on finding the Diamond Castle. After their departure Slyder kidnapped Alexa and brought her to Lydia. In the end of the movie, the spell wears off and the couple hug.

The couple that lives at the mansion

The garden of the mansion

The delicious food left for the girls

The first appearance of the couple 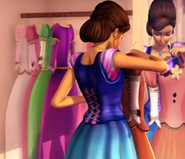 The closet full of dresses

The couple after Lydia's spell being broken
Add a photo to this gallery
Retrieved from "https://barbiemovies.fandom.com/wiki/Mansion?oldid=140542"
Community content is available under CC-BY-SA unless otherwise noted.