Major Mint is a character in Barbie in the Nutcracker. He is voiced by Christopher Gaze.

The mere presence of Major Mint and Captain Candy suggests the kingdom had its own army, although what happened to the rest of the soldiers is never explained. Major Mint is a high-ranking army officer who has "tried everything" to defeat the Mouse King. When Clara and the Nutcracker meet him, he and Captain Candy are protecting the Parthenian citizens by hiding them in the treetops. The Major doubts their story about the Sugar Plum Princess, but he agrees to accompany them on their search for her as long as he is in charge.

Major Mint is a very serious man. He seems to be completely devoted to his job and the military, even if the only soldiers besides himself and Candy are working for the Mouse King. Presumably because he has been living this way for a very long time, he seems to rely on army rules; a trait that is particularly obvious in the way he walks and acts.

Because of the fact that he outranks everyone around him, Major Mint has an extremely high opinion of himself. He only agrees to join the search for the Sugar Plum Princess if he is in charge of the "expedition", as he thinks of it; despite the fact that he isn't even sure if this Princess exists. He takes any questioning of his decisions as a personal attack and he nearly gets the group killed when he calls the rock giant a "cheeky blighter" for smashing his boat. He also speaks with a thick, upper-class British accent.

However, despite this superiority complex, the Major is not an entirely selfish man. He expresses concern for the welfare of the people around him, and shows a lot of devotion to the civilians he's protecting. He also, occasionally, displays some very good leadership skills. However, he sometimes comes across as being awkward and absent-minded; he trips over while he's dancing and the snow faeries manage to distract him as well as the rock giant.

Major Mint doesn't seem to be a very sociable character; his only real friend seems to be Captain Candy, who knows how to cope with his military obsession. He expresses a particularly strong dislike towards Eric(possibly out of disappointment) and he and the Nutcracker immediately get off on the wrong foot after the latter mentions him. It's not helped that he often questions Mint's decisions, albeit very gently.

The Major's feelings about Clara aren't very clear, but he does seem to be a bit sexist ("probably saw a snake or a spider" he groans when Clara warns them about the rock giant). He also judges the Nutcracker based on his appearance (saying he is just wood, and that he is a stump) and does not seem to take note of the Nutcracker's bravery and helpfulness. However, like everyone else, he accepts Eric as King after he proves his worth; he even feels ashamed of the things he said about him after he realizes Eric heard it all in Nutcracker form. 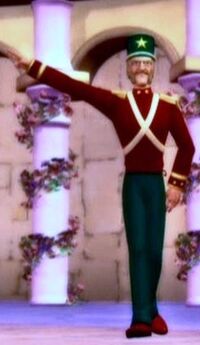 Major Mint is a tall, thin man. He is at least a head taller than most of the cast, though his age is never mentioned. He looks older than the other men in the movie. The major has blue eyes, and dark gray hair. He has sideburns, as well as long moustache that frames the lower half of his face (known as "mutton chops"). Major Mint also has bushy eyebrows, sunken in cheeks, and a strong chin.

The Major's uniform bares a very strong resemblance to that of a British soldier in the Victorian era, in basic appearance at least. He wears a tall, dark green helmet with a white and yellow candy cane patterned band above the peak of the helmet. There is a golden star on the front of the helmet and another candy cane pattern on the top in the form of a spiral. The Major wears a monocle with a gold brim with a chain that leads to the button on the right side of his collar.

The Major's attire consists of a red coat with gold, fringed shoulder pads and white cross belts on the front and back of the coat edged in yellow, he also has two lines of gold braiding around the cuffs with two gold button in between the lines of braid. He wears trousers the same dark green as his helmet, and red, well-polished boots which match the color of his jacket; All in all, the Major's uniform is immaculate. He also carries a sword to fight and defend with, but he mostly uses it to threaten people and possible enemies.

Retrieved from "https://barbiemovies.fandom.com/wiki/Major_Mint?oldid=141098"
Community content is available under CC-BY-SA unless otherwise noted.