The Majestique are a herd of horses in Barbie & Her Sisters in A Pony Tale. They live in the Valley of the Majestiques in secret until they are discovered by Barbie. There is a Majestique horse in the logo of Alpine Academy. They were fabled to be the "smartest", "fastest" and "bravest" horses alive and their jumps were so high and far that it was like flying.

The fable for the Majestique is that they are wild horses who live in the mountains of the Swiss Alps. They are descended from a breed of horses from over a thousand years ago that were for the princesses of the Kieburg royalty. The Majestique were loyal to the princesses and protected them, and the princesses took care of the horses too.

The year of the 108th annual Inter-Academy Equestrian Tournament, Barbie found one of the horses and they helped each other on different occassions. Barbie named the horse Majesty, after her herd, and they had a special bond. Philippe Cheynet, the riding master of École Montagne, a rival academy to Alpine Academy, knew the Majestique were not from a fable. He found evidence that they were real and wanted to own them. If Alpine Academy lost the tournament, the owner Marlene would have to sell the Alpine horses and land to Bridgette Cheynet, owner of École Montagne.

At a dance party the night of the opening day of the tournament, Philippe freed the Alpine horses. Majesty led the horses to the Valley of the Majestiques and Barbie found them there. She didn't want the herd to be exposed so that Philippe couldn't harm them, but she decided to ride Majesty for the Pacific Steeplechase against Philippe. She won and the Majestique horses were safe from Philippe and Alpine Academy was no longer in danger of being sold.

When Barbie and her sisters were about to leave, she planned to bring her horse back to Malibu with her, but by the end of the tournament, she loved Majesty too much to separate her from the Majestiques. She set Majesty free and said she would never forget her.

The Majestique horses are strong horses with a pink streak in their manes. In Etienne's story, there are white, gray and black Majestiques, but in the valley, there are only white ones. 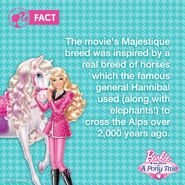 An official Barbie fact about the herd.

The logo for Alpine Academy, featuring a Majestique.

The horses jumping in the sunlight.

The black Majestique with a princess on its back.

A Majestique alone running
Add a photo to this gallery
Retrieved from "https://barbiemovies.fandom.com/wiki/Majestique?oldid=134405"
Community content is available under CC-BY-SA unless otherwise noted.