Female
Madame Katerina is a character in Barbie in The Pink Shoes. She is voiced by Lori Triolo. She works at her sister Madame Natasha's ballet company as a seamstress with Hailey.

When Hailey cannot find any other dance shoes that are Kristyn's size, Katerina gives her a pair of pink shoes. At the end of the film, after watching Kristyn's successful performance, Madame Katerina returns the pink shoes to a cabinet where there are many more pairs of magical pink shoes. So she knew about the pink shoes and decided to give them to Kristyn after she looked at the dresses and of Giselle and Odette and told her that she dreamed to dance like them. 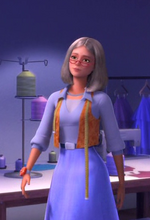 Different from her sister, Madame Katerina tends to be more understandable and sweet. She comforts Kristyn and always compliments her for her dance. She is a kind and optimistic woman.

Madame Katerina has pale skin, gray hair and brown eyes. She wears a blue dress with a black belt and a and a golden vest. She wears a pearl necklace and red glasses. She is also seen having seamstress meter around her neck. She also has a pincushion bracelet with needles.

Retrieved from "https://barbiemovies.fandom.com/wiki/Madame_Katerina?oldid=140802"
Community content is available under CC-BY-SA unless otherwise noted.