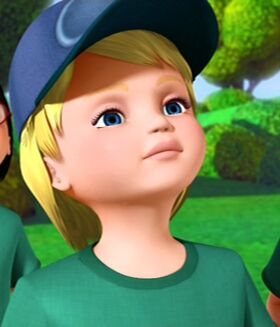 Lucas is a character in Barbie Presents Thumbelina. He is voiced by Sean Thomas.

Barbie took a group of children that included Lucas, Emma, and Olivia to a field that hosted a nature reserve. Each child picked a tree to plant to help the environment. All of the trees were small, but Emma picked the smallest tree. Lucas ridiculed Emma's tree, making her feel insecure, but Barbie comforted her.

Barbie told Lucas and other children in the group a story about how even the smallest tree, and the smallest people, such as children and twillerbees, can make a significant difference. Lucas asked Barbie if the nature reserve they were on was the one that the twillerbees lived in, and Barbie allowed Lucas and the other children to look for the twillerbees. Thumbelina, Janessa and Chrysella, who had been nearby listening to Barbie's story, created a tree to give Lucas and the others a "twillerbee surprise".

Lucas finds twillerbees interesting and he tries to find them.

Retrieved from "https://barbiemovies.fandom.com/wiki/Lucas?oldid=136681"
Community content is available under CC-BY-SA unless otherwise noted.