Male
Ivan is a supporting character in Barbie of Swan Lake. He is an elf who lives in the Enchanted Forest, ruled by the Fairy Queen. After being cursed by an evil wizard named Rothbart, who is the Fairy Queen's cousin, Ivan became a porcupine from dusk until dawn. Ivan is played Tommy, and voiced by Ian James Corlett.

Ivan and a group of other elves tried to stop Rothbart from taking over the Enchanted Forest. This backfired as Rothbart captured them and turned them into animals. Ivan was turned into a porcupine. Carlita, one of the elves and Ivan's love interest, helped the elves to escape, and the Fairy Queen made it so they could be humans from dawn until sunset. 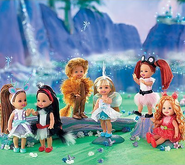 Add a photo to this gallery
Retrieved from "https://barbiemovies.fandom.com/wiki/Ivan?oldid=139048"
Community content is available under CC-BY-SA unless otherwise noted.