Brett Dier
Dillon Matthews is a character in Barbie in The Pink Shoes. He is the male lead at Madame Natasha's ballet company. Dillon is friends with Kristyn Farraday, who has a crush on him. Dillon is voiced by Brett Dier. Dillon enjoys watching Kristyn dance even if she doesn't follow the proper choreography.

Dillon is a friend of Kristyn. They both seem to have a crush on each other. He has to dance the Prince Siegfried role with Tara Pennington who also likes him. In the end it is shown that he gets to dance the part of Prince Albrecht with Tara as Giselle in the dance company's upcoming show.

Dillon is a very good and protective friend, always cheering on his friends no matter what the situation. He enjoys how Kristyn dances her own way. 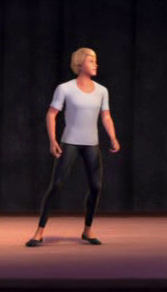 Dillon has blonde hair, light skin and blue eyes and a strong upper build. His training outfit is the same as every male dancer in the studio. A white t-shirt with black tights and black dancing shoes. His performance outfit is the same as Prince Siegfried's uniform, just without the red sash. It consists of A purple tunic with gold detail. Underneath the tunic is a white Renaissance shirt and he wears gray tights and black boots.

In the Christmas Special, he wears a similar outfit at the movie with the red band, but like a pink-candy lollipop with a purple belt. It matches with the dress of Kristyn's.

Retrieved from "https://barbiemovies.fandom.com/wiki/Dillon_Matthews?oldid=136466"
Community content is available under CC-BY-SA unless otherwise noted.