Male
Desmond is the tertiary antagonist of Barbie in The 12 Dancing Princesses. He was the faithful servant of Duchess Rowena, and he is voiced by Garry Chalk.

Desmond appears in the movie together with Duchess Rowena and her monkey Brutus. Possibly, he is her only servant, because he is the coachman and baggage man at the same time. He is ready to do anything that Rowena wants; he changes the princesses' room, sits around their room all night; later he breaks the magical stones. In the end of the movie, under the spell of golden pollen, he was forced to dance with Rowena forever. He perhaps has a crush on his mistress Duchess Rowena.

Desmond is a large and clumsy man. He has gray hair and light teal eyes. He is very strong, this is proved when he breaks the magical stones. 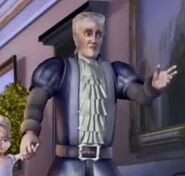 Desmond and Brutus in the Princesses room.
Add a photo to this gallery
Retrieved from "https://barbiemovies.fandom.com/wiki/Desmond?oldid=139102"
Community content is available under CC-BY-SA unless otherwise noted.