Barbie as The Princess and the Pauper

Barbie of Swan Lake is the 3rd Barbie movie. It was released on September 30, 2003, and it made its TV premiere on Nickelodeon on November 16, 2003.[1] The film follows the story of a girl named Odette, a shy village girl who thinks she is not brave. One day fate takes her to an Enchanted Forest, and she discovers that she is the only person who can save it from the evil wizard, Rothbart. The story was a loose adaptation of the Swan Lake ballet and featured the music of Pyotr Ilyich Tchaïkovsky. The movie's animation is made by Mainframe Entertainment.

"A young girl named Odette follows a beautiful unicorn, Lila into the Enchanted Forest and picks up a magic crystal, that proclaims her destiny as savior of the enchanted forest. Odette, hampered by an overwhelming sense of insecurity, proclaims herself unfit for the job and sets out to leave the forest when the evil wizard, Rothbart turns her into a swan.

Bolstered by the powers of the magic crystal, Odette vows to defeat Rothbart. Meanwhile, love blossoms between Odette and the town's Prince Daniel, and eventually, Odette finds a courage within herself that, combined with her intelligence and the true love between her and the Prince, proves powerful enough to defeat Rothbart."

The story is being told by Barbie to her little sister Kelly, who is feeling uneasy about being at overnight camp for the first time and doesn’t want to compete in the big race tomorrow. To help, Barbie remembers the story while looking at constellations, being started on after finding Cygnus.

The story begins with Odette dancing in her father's bakery. Odette feels happy because she knows how to dance a ballet dance that is very hard to handle or practice. She is always encouraged by her father to go to the village dances but Odette gets nervous dancing in front of everyone. Her sister, Marie, is also shown as a fast horse rider and always asking Odette to come with her but she turns down the offer. Meanwhile Prince Daniel, the prince, living in the castle in Odette's village, is introduced. A spirited man, he prefers exploring rather than marriage, much to the dismay of his mother, who wants him to settle down and have a wife and children, especially with the upcoming ball.

While working Odette sees a unicorn named Lila arriving in the village and manages to escape hunters and runs into an Enchanted Forest with the curious Odette on her heels. Lila becomes trapped, and Odette unknowingly removes a magic crystal (that was meant for whoever removed it is destined to defeat Rothbart), unaware that the Fairy Queen is watching; then Odette was shocked with what is happening.

She uses it to free Lila, and the Fairy Queen tells Odette that she is the chosen one for the crystal chose her by letting her take it away from the tree. She explains that Odette is the one who will purge the evil plaguing the forest, the Fairy Queen's cousin, Rothbart. While Odette is unconvinced about this, The Queen tells the story of how she and her cousin Rothbart lived in this forest together as children. When their uncle the King was to retire as ruler of the forest she was picked as his successor, infuriated and jealous Rothbart left the forest, but returned many years later with his daughter as a master of the dark magic and began to take over the forest more and more, the queen tried to stop him but he was overwhelmed by his dark magic. Even many of her elves tried to help but he turned them all into animals and forced them to build his palace.

The Queen ends by telling Odette every time Rothbart casts a spell on someone or takes them prisoner, her magic becomes weaker and he takes over more of the forest. Odette also meets the other elves of the forest: Carlita, now a skunk; Ivan, a porcupine; Marisa, a deer; Liana, a fox; Kelly, a cygnet; and Jenny, a mouse. Odette's father and Marie start searching for her, afraid because Odette is missing. Odette, not wanting to get mixed up in the situation, refuses. The Fairy Queen complies but sends Lila to escort her out and give one last try at convincing her. Rothbart appears in the wood with his daughter, cornering Odette by a tree. As it turns out he had gotten word that Odette had freed the crystal and is the one destined to defeat him.

She is trapped and transformed into a swan by the evil wizard, who wants to use Odette and the crystal to defeat his enemy, the Fairy Queen. The fairy queen also gives Odette a crown with the crystal that will protect her from Rothbart, when Rothbart tries to finish off Odette with his powers but the crystal saves her. The Fairy Queen is able to partially counter the spell just like the elves so that they and Odette can retain their human forms by night, although she will still turn into a swan by day. Realizing this Odette decides she will stay to help and break the spell. As it turns out there is a way, there is a book with the answers but only the barrier of the crystal can open it. Odette and Lila go to a magical library to find it with the help of Erazmus who is the only ancient creature from the king's time who is alive. Even after searching all night, they have no luck, but Odette refuses to give up.

After realizing that Odette can be killed by a human, Rothbart lures Prince Daniel into the forest, determined to get him to hunt Odette. However, Daniel is captivated by the swan's beauty and decides to let her live. The two soon fall in love when he sees her true form and she tells him why she is here and her spell. Rothbart unexpectedly turns up and reveals he was the one who tried to get Odette killed. He almost transforms the prince but thanks to Odette he doesn't succeed, Rothbart then leaves when he hears his daughter screaming as she is getting sprayed by skunks.

Odette offers to show Daniel the forest and the elves bring fruit and flowers and Odette is given a new dress They dance gracefully, and afterward Daniel asks Odette and the elves to come with him at the castle saying they would be safe but Odette tells him they can't, not just because of the spell but because they have to stay and protect the forest. Before long, the sun comes up and Odette transforms into a swan.

Daniel asks Odette to a ball, but she denies until he finally convinces her to come: Odette agrees but asks him to tell her family she is all right and will be home soon. When Daniel does come to the bakery he is informed by another cook that the baker and his eldest daughter have gone in search of Odette, Daniel says that when her father does return, he would like to speak to him. Soon, Erasmus - the troll in charge of the library - arrives, having found the book. He reveals to them that the solution is true love. Realizing that Daniel can save them all, Odette must go to the ball.

To help the Fairy Queen gives her a beautiful dress and she and the elves teach Odette how to dance. While all of their dances are different they all help Odette but the dancing is interrupted when Erasmus is kidnapped and with this the Queen loses her floating ability. They manage to save him (who is now a worm), but Rothbart has already learned of what will be his downfall. He also knows that if Daniel confesses his love to another, the crystal loses its power. So, he transforms his daughter Odile to look like Odette in the eyes of Daniel.

Erazmus tells everyone Rothbart's plan and while they don't know how he'll do it, they do know they have to stop Daniel before it's too late. Odette races to get to Daniel making her way through the forest, above the village and to the palace. At the ball, Prince Daniel pledges his love to Odile, thinking of her to be Odette. Odette, who was trapped outside in swan form, is unable to tell Daniel about the trick. Odette falls to the ground, the crystal having lost its power, and she is mortally weakened.

Rothbart reveals the truth, and he and Odile escape. Daniel runs after them, as the sun sets Odette becomes human again and as she lays unconscious Rothbart takes away the crystal and gives the crown to his daughter. Daniel defends Odette even though Rothbart changes his sword. Soon the Fairy Queen, Ivan, Carlita and Lila arrive in a carriage and find Odette unconscious The Queen uses her magic to bring Odette to them, who is barely alive. Daniel is able to trick Rothbart into turning his daughter into a pig. After bringing Odette into the carriage, they head back to forest, still determined to stop Odette, Rothbart follows them in pursuit and forces a tree to fall and crash the carriage back in the forest.

The Queen tries to battle him but due to her magic weakened, Rothbart turns her into a mouse. Lila and Ivan trying to fight him but they are not strong enough and back away from him. Odette regains conciseness as Daniel comes back to the forest, even with his bow and arrows and his sword Daniel is no match for Rothbart. Odette tries to stop the fighting and as a result Rothbart attempts to kill Odette and Daniel. The couple falls onto each other, their hands intertwined.

At that moment, the crystal's power explodes outwards, stopping Rothbart, as the two were truly in love. The two awaken, and all of Rothbart's evil is undone. At last, Odette and Prince Daniel confess their love for each other and everyone from the village and the Enchanted forest celebrates the event. It is revealed that Odette and Daniel are to be married and are finally happy. Rothbart gets what he deserves as he is now a Cuckoo Clock while Odile is a maid. In the end, it is shown the story has given Kelly a new resolve, and she promises she will participate in the race the following day. She yawns and heads off to bed, with Barbie smiling behind her.

Other characters include Liana, Jenny, and Marisa.

Peter Martins choreographed dances with principal dancers from New York City Ballet. The dancers were Charles Askegard, Ellen Bar, Maria Kowroski, Benjamin Millipied, Abi Stafford, and Janie Taylor. A song performed by Leslie Mills named "Wings" was used in the closing credits of the movie. It was produced by Mills and Chris Pelcer. The recording studios used for the film were Abbey Road Studios in London and A W R Music Studio in Chicago. 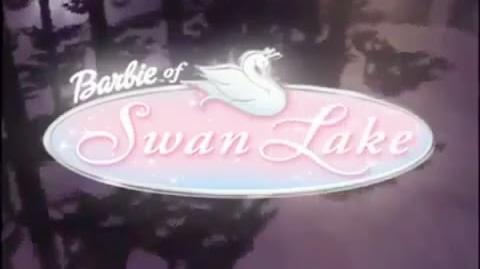