Barbie Movies Wiki
Register
Don't have an account?
Sign In
Advertisement
in: Barbie in the Nutcracker, Rainmaker Studios, Movies

Barbie in the Nutcracker is the first CGI-animated Barbie movie. It was released on October 2, 2001.[1] It later made its Nickelodeon premiere on March 21, 2004.[2] In this movie, Barbie plays a girl named Clara, who is gifted a Nutcracker for Christmas. After Clara is magically shrunk to the size of a doll, she goes to another world to try and break the spell. The movie is based on The Nutcracker ballet, adapted from E. T. A. Hoffmann's story "The Nutcracker and the Mouse King".

"Barbie® magically comes to life through stunning computer animation in this modern adaptation of the E.T.A. Hoffman classic. The tale begins when Barbie®, playing the role of Clara, receives a beautiful wooden Nutcracker as a gift from her favorite Aunt. That night, while Clara sleeps, the Nutcracker springs to life to ward off the evil Mouse King who has invaded Clara's parlor. She awakes and aids the Nutcracker, but the Mouse King shrinks her by casting an evil spell. Clara and the Nutcracker set off on a spectacular adventure to find the Sugarplum Princess, the only one who can break the Mouse King's evil enchantment.

The tale is enhanced with spectacular dance scenes created by the acclaimed choreographer Peter Martins, and features the beloved music by Tchaikovsky. The real-life movements of dancers from the New York City Ballet bring the beauty of ballet to the screen in a way never seen before.

Barbie in the Nutcracker™ shows that, if you are kind, clever and brave, anything is possible...."

Barbie and Kelly are practicing their dance steps for the ballet. Kelly is having trouble and thinks she'll never get it. To help her Barbie tells the story of the Nutcracker.

Clara and Tommy Drosselmayer have been living with their stern grandfather ever since their parents died. Grandfather Drosselmayer and Aunt Elizabeth have different ideas about how to raise children. At Christmas, Clara receives a Nutcracker doll from Aunt Elizabeth. Clara's little brother Tommy accidentally breaks the Nutcracker's arm. Clara fixes the Nutcracker and falls asleep in her parlor with it, but at midnight a portal to the land of Parthenia opens up and the parlor is invaded by a Mouse King and his army, searching for the Nutcracker. Nutcracker comes to life and fights, but when Clara tries to help, she gets shrunk by The Mouse King’s magic scepter. When the army retreats, thanks to Clara hurling her shoe at the Mouse King knocking him out, Nutcracker tells her he only looks like a Nutcracker because of the Mouse King. Both victims of the evil king's magic have to find the Sugar Plum Princess, the most powerful fairy in Parthenia.

The owl from on top of the clock tells the two that the Sugar Plum Princess lives across the Sea of Storm which is dangerous to sail. At first Clara doesn't want to go but doesn't want to stay small forever either so Clara receives a locket that’ll let her return home at anytime, to her normal size, and she and the Nutcracker go through a mouse hole. It leads to caves made of ice and leaves their thanks to snow faeries breaking the ice. They enter Parthenia, where the Mouse King is ruling, (Clara is amazed with the land) and the king's spy, a bat named Pimm, see Clara and the Nutcracker. He goes to inform his master, and also tells the Mouse King they are searching for the Sugar Plum Princess. The King admits that he never heard of this Princess before and decides to research her and he sends the soldiers to capture the Nutcracker. Clara and Nutcracker have come to a destroyed Gingerbread Village and meet two children and a horse. The children, Peppermint Girl, and Gingerbread Boy, and their horse, Marzipan, travel with Clara and Nutcracker because they are alone and can’t stay.

Clara learns that Prince Eric is the rightful ruler of Parthenia, before his father died, the king left his advisor (the mouse) in charge until Eric was ready to rule. Unfortunately though the mouse enjoyed the power of being king to well and as a result Eric mysteriously disappeared. The group goes into a forest, but soldiers chase them, so they hide in the treetops. They meet Major Mint and Captain Candy and some villagers, who interrogate them. Nutcracker is thought to be a "wooden spy" and Clara is a kidnapper, but the children insists they helped them so he and Clara are asked by the Major and Captain to explain everything. Clara and the Nutcracker tell the two they are searching for the Sugar Plum Princess, who will put an end to the Mouse King's reign. Major Mint however does not believe the story of the Sugar Plum Princess but Captain Candy, who was good friends with the Prince does believe their story. They plan to cross the ocean to find her, while the Major is not enthusiastic he and Captain Candy decide to go with Clara and Nutcracker.

Meanwhile, the Mouse King punishes two of his soldiers for not capturing the Nutcracker and looks in a book for information about the Sugar Plum Princess but finds only a basic description, describing her as 'kind, clever and brave'. Frustrated but determined, he creates a rock giant out of a pillar to destroy the Nutcracker and sends Pimm to go with the giant. The children stay with the villagers, and Clara tells Nutcracker she has figured out that he is Prince Eric, but he does not want to be the prince as his subjects think 'less of him than the Mouse King'; he just wants to make them happy.

Clara, the Nutcracker, Major Mint and Captain Candy start their search the next day. They encounter some stepping stones, and the Major crosses, but he knocks the Captain off. Nutcracker saves the Captain and helps Clara cross. They then reach the Sea of Storms, and Clara and Nutcracker go to find more supplies because Captain Candy lost his bag. Flower fairies help the pair find food and restore their home, but the rock giant finds them and chases them. It destroys a boat the Major and Captain were building to cross the sea and soon comes towards them.

The snow fairies come and turn the sea into ice, and the group goes with Marzipan across. Nutcracker cracks the ice, and the rock giant falls through and they get away. Pimm tells the king what happened to the rock giant and informs the king that the Major and Captain have joined, the Mouse King says the two are foolish for doing so and he has searched every book in the library and has found nothing on the Sugar Plum Princess. Still unwilling to let the Nutcracker succeed, the Mouse King makes another trap. Marzipan leads them to the Sugar Plum Princess's island. They see a fake building of the Sugar Plum Princess's palace. When Major Mint, Captain Candy, and Nutcracker go into the fake castle, there is an interior, but it is made of cardboard, as is the castle exterior. A cage drops on the men and captures them. Clara is alone and questions what to do but finally decides to help them when the flower fairies bring a huge swing to carry her to the castle where the men are being held.

Clara sneaks past the Mouse King, who’s building a bonfire in the castle courtyard. Meanwhile the Flower fairies have found all the subjects hidden and everyone agrees to stop the Mouse King, Pimm was nearby and heard. Clara sees that the King is building a bonfire and Pimm informs the King of the villagers which infuriates him and demands that everyone who is coming to be brought to the castle and taught a lesson. Clara comes to a dungeon and distracts its guards, but the dungeon is empty. Clara realizes how unnatural it would be to post guards at an empty room and, using logical thinking, smashes the invisible barrier hiding her friends. The group confronts the Mouse King, who turns all the peasants in the castle to stone, and with a growing spell defeats the nutcracker. Clara stands up to the Mouse King and calls him a coward so he prepares to shrink her again, but the Nutcracker deflects his spell, and the Mouse King is shrunk to the size of a real mouse and flees into the sewers.

Clara kisses the Nutcracker, and he transforms back into Prince Eric. Clara transforms into the Sugar Plum Princess, and the palace transforms; the citizens are free and the bonfire is replaced by a beautiful fountain. The Mouse King's reign is officially over. The people of Parthenia all celebrate and dance, and Eric asks Clara if she’ll stay and be his Queen. She decides she will, but Pimm and the Mouse King fly by and snatch Clara's locket off her neck. The Mouse King opens it, and she unwillingly returns home, just before Eric can declare his love for her. Fortunately, the Mouse King doesn't enjoy his victory for long, as Pimm is afterward knocked out by a snowball thrown by the Peppermint Girl, causing both villains to crash to the ground to their fall out.

Clara wakes up to find herself on her sofa with no nutcracker. No one believes what she says about the Nutcracker being a king, but her aunt comes in with a friend: Eric. He gives Clara her locket, and they dance. Grandfather Drosselmayer reluctantly allows Clara to travel with Aunt Elizabeth. Barbie finishes the story, and Kelly is finally able to perform the ballet steps perfectly.

Other characters include Marzipan, Masha, the Rock Giant, and the Mouse King's Army. 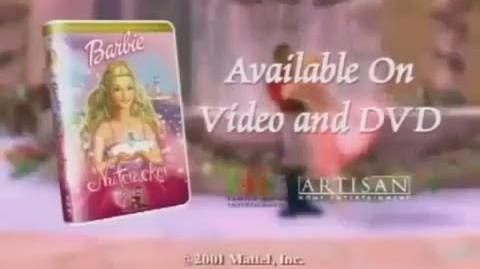