Barbie Movies Wiki
Register
Don't have an account?
Sign In
Advertisement
in: Barbie in The 12 Dancing Princesses, Movies, Rainmaker Studios

Barbie in The 12 Dancing Princesses

Barbie in The 12 Dancing Princesses

Barbie in The 12 Dancing Princesses is the 9th Barbie movie. It premiered on Nickelodeon on September 10, 2006,[1] and it was later released to DVD on September 19, 2006. The movie is based on the Brothers Grimm story The Twelve Dancing Princesses. It follows the story of Princess Genevieve and her eleven sisters as they go to a magical world where their wishes come true.

"In Barbie in The 12 Dancing Princesses, Barbie will dance her way into your hearts in this fun and enchanting all-new adventure. Join Barbie as the beautiful Princess Genevieve and her eleven dancing princess sisters as they discover a secret entrance to an amazing, magical world where wishes come true! But when their father is in danger of losing his kingdom and his own life, Princess Genevieve and her sisters must work together in order to save the day and their father. They learn that the power of family can overcome all obstacles!"

Barbie stars as Genevieve, a princess with eleven sisters: Ashlyn, Blair, Courtney, Delia, Edeline, Fallon, Hadley, Isla, Janessa, Kathleen and Lacey. Each princess is beautiful and different, but the twelve sisters have one thing in common: they all love to dance. They live in a castle with their widowed father, King Randolph. Randolph loves his daughters deeply, but at times can't understand them and feels that they should act more like "proper" princesses.

The girls' adventurous and free-spirited natures are viewed as "unladylike" and "unproper" by other members of the royal society and often lead them to make rude comments about the princesses. This both disheartens and hurts Randolph. Believing his daughters need a woman's touch, the king summons his cousin, Duchess Rowena, to the castle to help raise them. However, Rowena has her own plans, which include getting rid of Randolph and his daughters so she can take over the kingdom. She does her lessons with the girls but gives them grey dresses, she doesn't take the time to learn the girls' names, rearranges everything in their room and has a strict bedtime rule.

Sensing trouble, Genevieve and her sisters try to reason with Randolph, but due to Rowena's interference, the king doesn't believe them and says they must listen to his cousin. Attempting to break the girls' spirits, Rowena makes the princesses' lives miserable by stripping the castle of everything they love and having them practice "proper" behavior, like fanning. She even banishes dancing and singing from the castle when the girls were celebrating the Triplets' birthday.

Sad with the changes, the princesses find comfort in their mother's favorite story, which she gave to the girls when they turned five. It tells of a Princess who discovered a magical kingdom where gold flowers grant wishes and could dance at an enchanted pavilion for three nights. It is stated that even though the princess could not go back, she had some magic to take with her forever. They later discover that the story is true as Lacey, the youngest, sees that her lily matches the lily on the floor. Genevieve tells everyone to find a match on their book to a stone. Genevieve tries dancing from stone to stone; it doesn't work. She then tries dancing from oldest to youngest (which is actually stone-to-stone, only in an alternating up-down pattern). Lacey's stone doesn't work, so she twirls three times, like the character in the story. They enter the magical kingdom and end up dancing the night away.

While dancing Lacey, the youngest, falls and scrapes her knee. Genevieve dabs water from a nearby fountain on the cut, and it instantly heals, revealing that the water there is magic. Towards the end of the night the triplets are asleep and the girl's shoes are worn out and they all decide to go back. The Triplets thank Genevieve for their birthday and the girls go to sleep. The next day, the girls are tired, and the duchess finds their new dancing shoes worn through. Suspicious, Rowena believes that they were out dancing with princes, which to her means she would lose her chance to take the crown and rule the kingdom as planned. Meanwhile, the royal cobbler and Genevieve's love interest, Derek, comes to fix their shoes and sees that they are covered in gold dust. Genevieve dances on the mosaic in the pavilion outside (the same dance that opens the magical door hidden in their bedroom floor) identical to the one in their bedroom. While together, Genevieve asks Derek to find out what Rowena's true intentions are. The duchess continues to deprive them of any enjoyment and prevents them from visiting or singing to their father, who has suddenly fallen ill. The doctor gives Rowena a tonic for Randolph, which she quickly disposes of, revealing that she is poisoning him.

That night, Rowena tells the girls to be more awake tomorrow and wants no excuses. After leaving, has her footman, Desmond, stand guard outside the princesses' room to find out where they go. The sisters sneak back to the magic realm and dance well into the night again. Meanwhile, Derek discovers that Rowena is stealing heirlooms from the castle and dealing with an apothecary (presumably for the poison). He manages to get back the gauntlet, unfortunately he has to sell his horse to get it. He hurries back to warn Genevieve and her sisters. The next morning, the sisters are still exhausted, and Rowena demands to know why. When she gangs up on Lacey, the girls tell her the truth, but she doesn't believe them and forces them into servitude. They spend the day raking the leaves, when Lacey accidentally drops a basket of leaves she runs away crying, Genevieve goes to comfort her. Lacey feels sad that she is the youngest and hasn't found a talent of her own but Geniveve assures her that "Big or small there is a difference only you can make." That night, Genevieve and Lacey go to see their father but over hear him and Rowena talking and they hear him say they are a burden even though that is not really what he said. Later on, Rowena demands the truth again, but they tell her the same story. This makes Rowena angrier, she tells them tomorrow they'll be cleaning the stables, and she locks them in their room, blaming them for Randolph's failing health. Hurt by her cruel words, and due to a misinterpreted conversation between the king and Rowena, the girls can't help but feel that she's right and that their father would be better off without them.

Heartbroken and not knowing what to do, the princesses decide to return to the magical kingdom, this time they will stay there. A furious Rowena finds the sisters gone the next morning and demands that Desmund find them. That evening, Derek finally makes it back to the castle but discovers that the princesses are missing. Determined to find Genevieve, he sneaks into their bedroom. Remembering Genevieve's dance pattern, Derek enters the magic realm and goes to report his findings to the girls. Unfortunately, Rowena learns how to enter the magic realm due to her monkey, Brutus. After Derek has found the girls he tells them about Rowena selling their mother's processions for poison. The girls now understand what has been going on as well as Rowena's true intentions. They realize they have to go back and help their father, even though they won't be able to return to the magic kingdom ever again. Unfortunately Rowena was watching them and had Brutus steal some wishing flowers, she quickly returns to the castle and has Desmond destroy the mosaic that forms the gateway, trapping the sisters and Derek in the magical kingdom. As more of the stones get destroyed, the more the place disappears, trapping the girls.

Thinking she has disposed of the princesses, Rowena then tricks the weak King Randolph into making her acting queen until he recovers. Trapped in the magic realm, the girls and Derek try to find a way out. Genevieve eventually learns that only by dancing with Derek can she open another entrance back to their world. As they dance, the couple and the rest of the princesses float up into the sky while dancing and return home. However, this new gateway leads to their mother's dance pavilion (identical to the pavilion in the magic realm) instead of their bedroom. Once back, the sisters and Derek discover that Rowena is now queen, new guards (hired by Rowena) have been ordered to capture any of the princesses, and the princesses overhear that their father is dying.

Using their diverse talents, the princesses disable the guards and enter the castle to confront Rowena. Ignoring Genevieve's orders, Lacey enters the castle to help but is seized by Desmond. Derek and Genevieve defeat the enchanted suits of armor that defend Rowena (using the magical flowers that she stole from the entrance to the Magic Pavilion), but the duchess has the upper hand when Desmond drags in Lacey. Noting that Genevieve is the source of her sisters' resistance against her, Rowena uses the flowers to wish for Genevieve to dance forever and ever and ever. But as the flower dust comes towards her, Genevieve produces her fan and blows it back at Rowena, who starts dancing instead. Desmond soon joins her while trying to help, and the two villains dance their way out of the castle and down the valley.

It is revealed that Lacey has saved some water from the magical Pavilion. She gives it to her father and thereby heals the dying king. Randolph explains that Rowena was poisoning him and apologizes to his daughters for not believing them. He now truly understands them and realizes they will do great things and be wonderful princesses by just being themselves, just like their mother told him. The film ends with everything made right as Genevieve and Derek dancing at their wedding.

Other non-speaking characters include: 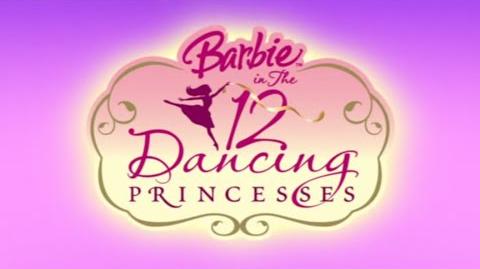 Barbie in The 12 Dancing Princesses was nominated in "Outstanding Original Song - Children's/Animated" to Arnie Roth (composer), Rob Hudnut (lyricist), Amy Powers (lyricist) for the song "Shine" in Daytime Emmy Awards 2007. The movie was also nominated in "Best Animation Program or Series" to Shea Wageman (producer) and Jennifer Twiner McCarron (producer) and "Best Direction/Storyboarding in an Animation Program or Series" to Greg Richardson, both of categories from Leo Awards 2007. This movie also wins both categories from Indonesian Movie Awards 2008.