"Surf's up for Barbie as she returns as Merliah, the fun and fashionable surfing champion who's also a magical mermaid princess! In this exciting sea-quel, Merliah makes a splash when she heads to Australia for the ultimate surfing competition. When the evil mermaid Eris escapes from her whirlpool, thanks to Kylie Morgan who steals Merliah's necklace, with plans to take Calissa's spot on the throne of Aquellia and get the power of Merilia, Merliah and her sea friends dive in to stop her. Merliah stops Eris from getting on the throne, and gets the power of Merillia and a new tail, too! It's a fresh new adventure where Merliah learns that anything is possible if you stay true to yourself."

On the 1st anniversary of Merliah's arrival to Oceana, Remo gave a summary about what happened in the first movie on Good Morning Oceana. In Malibu, Merliah, Fallon, and Merliah's rival Kylie were competing in a surfing competition. Fallon won 3rd place, Kylie won 2nd, and Merliah was 1st place. They were going to advance to the next part of the competition, which was going to take place in Australia. Merliah went to Oceana to tell her mother the good news.

Merliah met up with her Queen Calissa, and also Zuma. Calissa told Merliah that Merliah had to be present at the Changing of the Tides Ceremony in Aquellia, an underwater city. The ceremony takes place in Aquellia every 20 years and involes a member of the royal family to sit on an ancient throne. Next, they have to recite an ancient rite, and then they gain the power to make Merillia, the life force of the ocean. Merliah wanted to go to Australia for the competition to prove she was better than Kylie, and the competition was on the same day as the ceremony. Merliah decided to go to Australia instead of the ceremony.

Merliah, Fallon, Hadley and Kylie went to Australia. Merliah and Kylie competed against each other to advance to the finals of the competition. Kylie beat Merliah by knocking her into the water. Even though Kylie won, Merliah had performed a great surfing trick so she got attention from reporters. Georgie Majors came to speak to Merliah and asked if Merliah would be the spokes person for Georgie's company, Wave Crest. Wave Crest made surf gear, and Merliah happily agreed. They would have their first photo shoot at a luau taking place that night. While the luau took place, Kylie sat alone.

Calissa and Zuma went to Aquellia in New Zealand. They met up with the ambassadors of the ocean, Mirabella, Kattrin, Selena, and Renata. Calissa refused to go talk to Merliah and prepared for the ceremony instead. At the luau, Merliah had to take off the necklace that allowed her to transform into a mermaid because it wasn't from the Wave Crest brand. Merliah gave it to Hadley to take care of. A fish named Alistair approached Kylie while she was alone. He told her that Merliah's necklace made her better at surfing, and told Kylie to steal it. While Hadley was distracted, Kylie took the necklace.

Alistair tricked Kylie into putting it on and becoming a mermaid. Alistair told her to follow him, so Snouts followed them to see what was happening. Merliah, Fallon and Hadley searched everywhere for the necklace but it was too dark for them to see properly. Alistair had led Kylie to a whirlpool and he pushed her in. When Kylie fell in, Eris was freed. Eris planned to go to Aquellia and get the powers to make Merilliah so she could rule the ocean. Snouts went to Merliah for help. Merliah could sense that something bad was happening, so she followed Snouts to the whirlpool.

Eris teamed up with the Stargazers, a group of large evil fish, to help her with her plan. She had a new power, which was to make those affected live their worst nightmare. When the leader of the Stargazers questioned Eris, she used her powers and made him small, his worst nightmare. The Stargazers followed Eris to Aquellia. At the whirlpool, Merliah and Snouts rescued Kylie. Kylie explained that a mermaid came out of the whirlpool, so Merliah realised it was Eris. Kylie wanted to help Merliah stop Eris, so they went to Aquellia.

The four ambassadors had placed stones of the ocean in towers to prepare for the ceremony. Calissa invited them to join her for tea while they waited for the midday sun. Eris and the Stargazers arrived and battled Calissa and the ambassadors. Eris gave them all their worst nightmares: Calissa was unable to swim and sunk the the bottom of the ocean; Kattrin became slow at everything; Renata became scared and timid; Selena became an ugly fish; and Mirabella became enclosed in a tight space. Eris trapped them all together. Calissa ordered Zuma to go find Merliah. Merliah could sense that Calissa was in danger and she met Zuma and went to Calissa.

Merliah agreed to do the ceremony instead of her mom to save the ocean. She would lose her legs and become a mermaid forever, but Merliah agreed. Merliah, Kylie, Snouts and Zuma went to find Eris. It was almost midday. Merliah got to the throne after everyone fought, but she had no tail so the ceremony couldn't work. Kylie gave Merliah the necklace and Merliah got a tail and carried out the ceremony. Eris had tried to use her powers on Merliah, but they were repelled by the magic that happened when the ceremony happened. It hit Eris instead. Merliah gave Kylie the necklace again afterwards because she would drown without it. The ambassadors and Calissa were freed from their nightmares and Calissa congratulated Merliah. Eris ended up having her worst nightmare: legs instead of a tail. Worse still, she was stuck like this for all time and had lost her magical powers.

The ambassadors took Eris to a place more secure than a whirlpool. Merliah was disappointed because she could never use her legs again. Kylie then thought that surfing after all this, wouldn't be right. Merliah said that it would be right, and that Kylie would be doing it for both of them. They all swam up so Kylie could compete in the finals. Kylie kept the necklace but took it off and began to swim away. Merliah said that she wished she could be a human again, and her legs magically came back. Calissa explained that the ceremony made whoever did it into their true self.

Kylie and Merliah went to the beach for the competition. Break knew that if Merliah didn't show up, it would be because Calissa needed her. When it was time to surf, Merliah and Kylie were in the water in time for a huge wave. They decided to compete fairly, but Merliah was distracted by the Merillia she created when she touched the sea water. Kylie ended up winning, so she and Merliah held the trophy together. Georgie Majors offered Kylie a spokes person role with Wave Crest, and Kylie accepted. Everyone cheered for Kylie and Merliah and they danced together with the trophy.

Barbie in A Mermaid Tale 2 had a cinema premiere in the UK at Leicester Square's VUE cinema on 12th February 2012. There will be a pink carpet and Barbie and other celebrities will walk down it. British magazine OK! had a competition for 10 people to win tickets to the premiere of Barbie in A Mermaid Tale 2. The question, which had to be answered on Facebook, was "What is the name of the magical princess Barbie?", and the answer was "Merliah".

The competition winners would get to meet Barbie and be the first to watch the film, and do mermaid related activities and meet Barbie. The 10 winners were Chantel Venter, Stacey Akers, Rebecca Hurst, Kim Green, Rhiannon Martin, Stephanie Smith, Sarah Jane Moore, Amy Celebi, Chantal Scott, and Jenny Edgar. 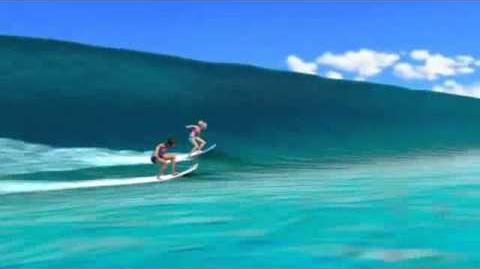 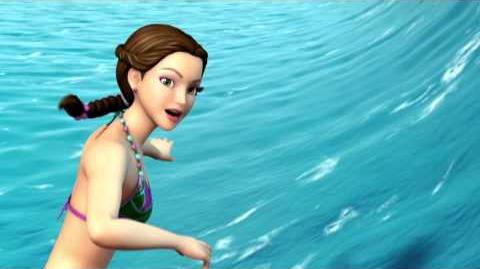 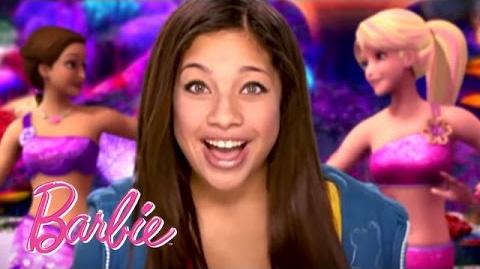 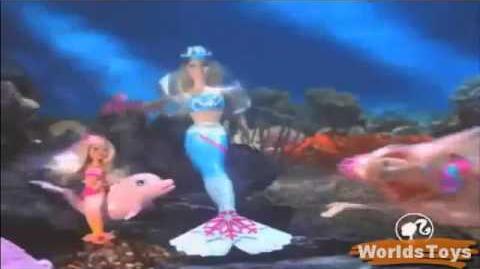 Retrieved from "https://barbiemovies.fandom.com/wiki/Barbie_in_A_Mermaid_Tale_2?oldid=134369"
Community content is available under CC-BY-SA unless otherwise noted.