Barbie Movies Wiki
Register
Don't have an account?
Sign In
Advertisement
in: Barbie as the Princess and the Pauper, Rainmaker Studios, Movies

Barbie as The Princess and the Pauper

Barbie as the Princess and the Pauper

Barbie as the Princess and the Pauper is the fourth Barbie movie. It was released on September 28, 2004, and it made its TV premiere on Nickelodeon on November 14, 2004.[1] Barbie plays two roles: a blonde princess named Anneliese and a brunette pauper named Erika. The girls dream to be free of their duties and by following their heart they will make their dreams come true.

"In her first animated musical, featuring seven original songs, Barbie comes to life in this modern retelling of a classic tale of mistaken identity and the power of friendship. Based on the story by Mark Twain, Barbie as the Princess and the Pauper features Barbie in an exciting dual role as a princess and a poor village girl who look amazingly alike! The girls' paths are fated to cross when Princess Anneliese is captured and Erika, her look- alike, must try to save her. Can Erika pretend to be the Princess and foil her captor, the evil Preminger? And what of the handsome King Dominick, who falls in love with Erika, mistaking her for Anneliese? In this magical musical performance, two beautiful, adventurous girls dare to follow their dreams and discover that destiny is written in a very special place: your heart!"

Narration: Long ago and far away, in a village high on a mountain top, something amazing was occurring. At the very same moment, two identical baby girls were born. One, a baby princess, the king and queen were overjoyed. Princess Anneliese would have only the finest. The second baby girl was named Erika. Her parents loved her every bit as much as the king and queen loved the princess, but they worried. They were so poor, how would they be able to care for their little daughter? Many years passed. The princess learned her royal duties, while Erika worked long and hard as a seamstress for the spiteful Madame Carp. With lives so different, it wasn't surprising that the princess and the pauper never met, but fate decreed they would. It all started at the royal mine, when the miners informed the Queen the gold had run out. The widowed Queen was shocked, the kingdom was now bankrupt. How was she going to take care of her people? If only she could call on her trusted adviser Preminger, but he was away on a long journey. She needed to do something quickly to save the kingdom, but what? And then it struck her: Nearby lived a rich young king, who was seeking a wife.

While Anneliese and Erika have different lives they both wish to be free. Anneliese wants to be able to do what she wants without having all her lessons or events to attend and marry her tutor/true love, Julian. However, her mother tells Anneliese that she must marry King Dominick to save their kingdom. Erika wants to be a singer and travel the world but she has to work off her parent's debt and interest to Madame Carp who borrowed money from her to feed Erika. They both know in their heart that duty is more important but they will never stop dreaming of freedom.

Queen Genevieve doesn't know that the reason behind the kingdom's bankruptcy is her adviser, Preminger. He has been stealing the gold from the royal mines with his sidekicks, Nick and Nack, for a long time. His plan is to present all the gold he stole to the Queen and Anneliese, the Queen will be so grateful and he would be asked to marry the princess then, Preminger can succeed to the throne and achieve all that he wants as King. His two sidekicks then inform him about the union of the Princess and King Dominick. Preminger is furious that the Queen made a decision without him but he sees opportunity he decides to change his plans and have Princess Anneliese go mysteriously missing, then bring her back, thus making the queen so grateful that she will ask him to marry Anneliese. While Anneliese is studying with Julian, who is in love with her, he tells her that King Dominick (who is pretending he is someone else) and Ambassador Bismark have come to see her with an engagement gift, a necklace. The Queen wants the wedding to be a week from then, which gives Preminger less time to carry out his evil plan (he is shocked but says that is acceptable).

Julian takes Anneliese for a day out into the kingdom as that she can be free for once. Anneliese hears Erika singing and goes to listen. Erika is singing in the street to earn money for herself but Madame Carp takes the money. Anneliese and Erika talk to each other and learn they are identical, apart from the crown shaped birthmark Anneliese has on her shoulder and their hair color. They become friends and Anneliese returns to the palace. That night, she is kidnapped by Nick and Nack, who leave a letter saying she ran away.

Julian suspects that Preminger kidnapped Anneliese, so he asks Erika to pretend to be the princess until she is rescued. Preminger is surprised when Erika, as Anneliese, comes to the palace because he thought she had already been kidnapped. Over time, Erika and Dominick fall in love, but Erika is worried about what will happen when people find out she is not Anneliese. The real Anneliese has escaped from Nick and Nack. Julian finds out and tries to inform the Queen, but then he gets kidnapped. Anneliese is turned away from the palace because the guards think Anneliese is already in there. She gets taken away by Madame Carp because she thinks Anneliese is Erika.

Preminger decides that the Anneliese in the castle is an impostor and takes the real Anneliese to the royal mines with Julian and tells his henchmen to collapse the mine with Anneliese and Julian trapped inside. He goes back to the palace, exposes Erika as a fake, and accuses her and Julian of treason. Erika is sent to the dungeon and she feels terrible about everything and becomes worried about Anneliese and Julian. She lulls the guard to sleep and takes his keys so she can escape. She escapes, but bumps into King Dominick. He tells her that he doesn't believe what Preminger said about her. In the mines, Anneliese and Julian find out how to restore the kingdom's resources from some rocks that have geodes in them. They confess their love and escape from the mines.

Preminger convinces Queen that Anneliese is dead and says they must marry to save the kingdom, and she has no other options so she agrees. Before they can get married, Anneliese arrives and tells everyone the truth about Preminger, Erika and Dominick then arrive to see that the Princess is safe. Preminger tries to escape on a horse but Julian and Dominic go after him themselves, the two girls stop Nick & Nack by tripping them. Herve, whom Serafina and Wolfie have befriended takes Preminger back after his mistreatments. After crashing onto the wedding table, Preminger is soon arrested along with Nick and Nack for the crimes they committed. She tells her mother that she wants to marry Julian and that they can save the kingdom without marriage. Thanks to the princess Erika is finally out of debt and free to leave. Erika tells the King she wants to sing so she doesn't marry right away, before she leaves Dominic gives her the ring to remember him by. After months of performing she returns after realizing that sometimes freedom means choosing not to leave, but to stay. Anneliese discovered quartz in the mine, saving the kingdom. Madame Carp goes out of business due to the castle not purchasing her dresses and Dominick and Erika soon wish to marry as well. Anneliese and Julian, and Dominick and Erika, all have a double wedding, and their cats, Serafina and Wolfie, have kittens.

Other characters include the King. 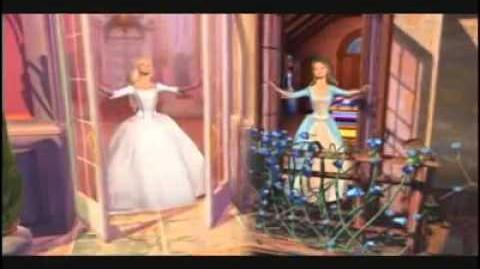