Barbie as Rapunzel is the 2nd Barbie movie. It was released on October 1st, 2002. The film follows the story of a lost princess named Rapunzel who lives far away in the forest in a big tower with her stepmother Gothel who treats her as a servant, but Rapunzel wants to be independent and wants to paint, which Gothel hates.

"Long, long ago, in a time of magic and dragons, there lived a girl named Rapunzel, who had the most beautiful, radiant hair the world had ever seen. But Rapunzel's life was far from wonderful. She lived as a servant of Gothel, a jealous, scheming witch who kept her hidden deep in a forbidding forest, guarded by the enormous dragon Hugo and surrounded by an enchanted glass wall.

"However, in a twist of fate, Rapunzel's discovery of a magic paintbrush leads her on a journey that will unravel a web of deception, bring peace to two feuding kingdoms, and ultimately lead her to love with the handsome Prince Stefan. She succeeds with the help of Penelope, the least intimidating of dragons!

"Barbie as Rapunzel shows that love and imagination can change the world..."

The story is being told by Barbie to her little sister Kelly, who does not have confidence in her painting abilities. Rapunzel lives as a servant to the witch Gothel, who resides in a manor isolated in the woods. She grows up believing that Gothel saved her from abandonment as an infant. Rapunzel finds companionship in Penelope, an outgoing dragon, and Hobie, a worrisome rabbit. Rapunzel spends what free time she has painting.

The story begins with Rapunzel painting a beautiful picture of a seashore where she dreams she can go to be free one day. Hobie soon alerts her of Gothel's approach, and Rapunzel just manages to get things ready in time. However, Gothel notices a smear of paint on her cheek and accuses her of not appreciating everything she has done for her.

While preparing tea for Gothel, Penelope accidentally finds a secret staircase which, leads to an old room below the manor. In it, they discover a gift from her parents who allegedly deserted her: a silver hairbrush engraved with the following: “Constant as the stars above, always know that you are loved. To our daughter, Rapunzel, on her first birthday. With Love Forever, Mother and Father.” These words leave the young artist questioning her past for the first time--Gothel had always told Rapunzel that she was abandoned by her parents in the woods when she was only a few days old and questions why Gothel would’ve lied to her about it. Her diversion is quickly interrupted by Gothel’s call for tea.

After serving Gothel her meal, Rapunzel and her friends revisit the cellar where Penelope exposes yet another secret: a tunnel leading to the nearby village. Rapunzel takes this path to the small kingdom and is able to rescue a princess named Katrina from a pitfall. Soon after, Rapunzel is introduced to Katrina’s elder brother, the handsome Prince Stefan. He explains to her that the trap Katrina managed to escape was put there by King Wilhelm, the ruler of an opposing kingdom. Enchanted by the mysterious maiden, Stefan asks to meet her again, to which she agrees, though their meeting is ended abruptly before Stefan could tell her his name when she quickly rushes back to the woods to avoid being discovered by Gothel. Unknown to Rapunzel, Gothel's pet ferret, Otto, has witnessed the entire exchange.

Angered, Gothel demands Rapunzel tell her the boy's name. Rapunzel insists that she does not know it, but Gothel does not believe her, thinking she has been lying to her, despite that she knew his existence. Rapunzel tells her that she cannot keep her locked away forever, to which Gothel responds: Watch me. Gothel destroys Rapunzel's paint and paintings before transforming her bedroom into a tall tower and stations Hugo, Penelope's father, outside. Gothel refuses to let Rapunzel go until she tells her the name of the boy she met.

That night, Rapunzel has a dream that Prince Stefan found her tower. He came up by climbing her long hair. When up there, they are about to kiss, but Gothel shows up and separates them. Rapunzel then wakes up and reads the engraving on the hairbrush. She realizes that there is still hope. Going back to sleep, a shower of light turns the hairbrush into a paintbrush.

It is revealed that Gothel is the fiendish puppetmaster of the whole feud and is enjoying watching the two kings attempt to destroy one another.

Rapunzel is left alone with Hobie and Penelope, who cheered her up with new paints to replace the ones taken away by Gothel. Hobie discovers the paintbrush, and Rapunzel begins to paint. It soon becomes clear that she doesn't need paint, and whatever she paints becomes real. Rapunzel paints the village and then steps through, arriving at the palace gardens and meets Stefan.

She shows him the brush and asks for help to find its maker but insists that he never tell her his name. She meets a silversmith who says his brother made it, who lives on Wilhelm's side. The silversmith has not seen his brother in years, making him very upset. Stefan realizes that the feud is hurting the villagers more than he realized.

Afterward, Stefan asks Rapunzel to a masquerade ball. She replies that she will meet him there. He says that her hair is a 'beautiful giveaway.' Penelope soon arrives, explaining that Gothel is coming and they must leave so that Hugo will not be hurt. Rapunzel leaves and paints a way out.

When back at the tower, Rapunzel uses the paintbrush to paint herself a beautiful gown. Hobie and Penelope provided a mask. Unfortunately, the paintbrush's light can be seen, and Otto sneaks in. He quickly steals the invitation without their notice and presents it to Gothel.

Angered, she arrives at the tower and slices off Rapunzel's hair, and breaks the paintbrush into pieces. She also manages to destroy the painting of the village. Because she thinks Rapunzel refused, to tell the truth, Gothel puts a spell around her tower, which holds people who lie forever and can never be broken. Gothel then storms to King Frederick and Stefan's castle, intent on destroying them. Back at the tower, Rapunzel manages to escape with the help of Penelope and Hugo, as the spell only works if the prisoner is a liar and rushes to save Stefan.

Stefan is lured away by Gothel, who is disguised as Rapunzel, but Gothel reveals herself and begins her attack. Wilhelm appears before Frederick, hoping to end the feud by force. It is revealed the source of the feud was because he believes Frederick kidnapped his daughter, who has been missing since she was an infant. Frederick replies that he planned nothing of the sort, and he has no idea where Wilhelm's daughter is, to which Gothel reveals that she's the one who took Rapunzel because Wilhelm "loved" her but married another woman, as he saw her only as a friend. Rapunzel arrives just in time to stop them from fighting, and Wilhelm recognizes her as his daughter. A battle ensues, and Gothel begins to attack Rapunzel with magic. As Rapunzel runs into the royal maze, she remembers the magic painting of the tower and tricks Gothel into running into it—which Hugo reminds her she can't escape as she has a lying heart.

Rapunzel's reunited with her biological parents, Wilhelm manages to reconcile with Frederick, and the two kingdoms are united under a marriage between Rapunzel and Stefan. The couple moves into a castle of their own, with Hobie, Penelope, and Hugo moving in with them and living a better life. It's later revealed that Otto is now Gothel's new servant, but it's implied that Gothel eventually dies of starvation. The story ultimately ends with Rapunzel walking along a beach with Stefan, which is the same one as Rapunzel painted with a castle in the distance, implying her dreams came true. The scene becomes the painting Barbie had been working on. Kelly now feels better and begins painting with blue, which turns into the credits.

The music in the film was produced by Arnie Roth, including themes from Symphony by No. 9 (New World) by Antonín Dvořák. All additional music was composed, arranged, and orchestrated by Roth, and he conducted The London Symphony Orchestra, who performed the music. Roth won "Best Original Score" at the DVD Exclusive Awards in 2003.

"Rapunzel Theme" was performed by Becky Taylor, with music by Roth. Roth and Rob Hudnut collaborated on the lyrics and music for "Constant As The Stars Above", which was performed by Jessica Brown. "Wish Upon A Star" was sung by Samantha Mumba, and the lyrics and music are by Niclas Molinder, Joacim Persson, and Pelle Ankarberg. It was produced and arranged by Korpi & BlackCell for Murlyn Music, with guitar by BlackCell. All three songs were nominated for "Best Original Song" at the DVD Exclusive Awards in 2003. 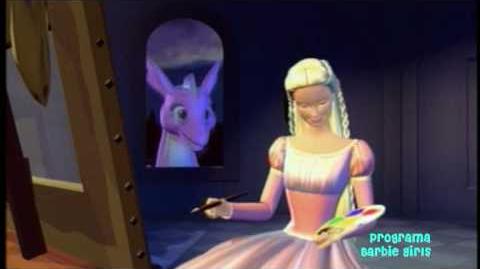 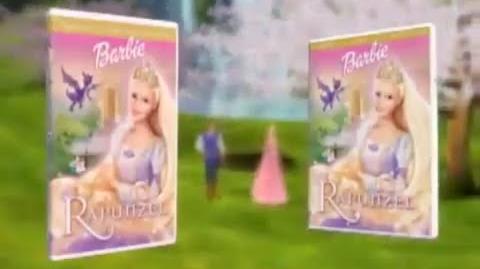 Retrieved from "https://barbiemovies.fandom.com/wiki/Barbie_as_Rapunzel?oldid=150185"
Community content is available under CC-BY-SA unless otherwise noted.