Barbie Movies Wiki
Register
Don't have an account?
Sign In
Advertisement
in: Barbie and the Magic of Pegasus, Rainmaker Studios, Movies

Barbie and the Magic of Pegasus

Barbie and the Magic of Pegasus

Barbie and the Magic of Pegasus is the 6th Barbie movie. It premiered on Nickelodeon on September 18, 2005,[1] and it was released to video on September 20, 2005. It is the only Barbie film to be released in 3D. The film follows the story of Princess Annika, who has to save her parents after an evil wizard named Wenlock turns them to stone.

"Barbie takes flight in her first original princess fairy tale movie, Barbie and the Magic of Pegasus. Princess Annika discovers adventure when she is befriended by Brietta - a magnificent winged horse - that flies her to the beautiful Cloud Kingdom. Annika has only three days to break the spell of Wenlock, an evil wizard who has turned her family to stone.

On her quest to defeat Wenlock, Annika meets new friends and together they travel to forbidden forests, skate through icy caverns and fly above the clouds as they attempt to build a magical wand of light."

In a magical northern kingdom, the Queen wants to surprise her daughter, Princess Annika, played by Barbie, with a birthday gift. When she opens the door to Annika's room, she discovers that Annika is missing, having gone to an ice rink without asking for permission. Out skating, Annika meets a small polar bear whom she names Shiver. When Annika returns to the palace, her parents are so worried and overprotective they forbid her from skating ever again. This irritates and frustrates Annika who never gets to do what she wants and is often treated like a child even though she's practically grown up now. After Annika's skates are taken from her, she goes up to her room in tears and tells her parents they ruin her life.

That night, Annika sneaks out of the palace to join a festival down at the lake, (she manages to get her skates back). Everyone is having a wonderful time until a powerful wizard named Wenlock appears and asks the princess to marry him. When Annika refuses, Wenlock furiously reminds the king and queen the fate of their "other daughter," which surprises Annika. The King points out that he already has a wife but Wenlock says that he has three and each one is prettier than the next. When Annika still refuses to marry him, Wenlock magically turns everyone into stone, but Annika is saved by Brietta, a flying horse, before she's out of sight Wenlock tells Annika that she has three days to marry him; otherwise, the spell will become permanent.

Brietta, (played by Summer), takes Annika to a castle in the clouds called the Cloud Kingdom. There, Annika meets Queen Rayla as well as three young girls who brighten the clouds. Annika tells the Queen what happened and Rayla says that she will see what she can do, in the meantime has Annika stay with them and gives her a new dress.

Annika soon discovers that "the other daughter" of the king and queen is Brietta, who was transformed into a Pegasus by Wenlock when she refused to marry him on her birthday as well 16 years ago. When her parents couldn't break the spell Brietta ran away to the cloud kingdom and as a result, their parents moved their kingdom somewhere not even Wedlock would find them but did (explaining why Annika's parents are so overprotective). Annika now understanding this decides to stop Wenlock, but is told that his spells are unbreakable, however, there is one thing that can stop him, the "Wand of Light". She decides to build the Wand of Light to break Wenlock's spell. To accomplish this, they must have a measure of courage, a ring of love, and a gem of ice lit by hope's eternal flame. While Brietta is hesitant at first, Annika talks her into helping her when she tells Brietta she can be human again. Before they leave, The Cloud Queen gives Brietta a crystal bell to ring if she needs help.

The group travels to the Forbidden Forest, where they meet a young man named Aidan, played by Ken, who helps them after they get caught in a net. When Shiver and Annika fall into a giant's stew pot, Annika tricks him into chaining himself to a post and uses her hair ribbon to climb out. The ribbon is the same size as her, and as a measure of courage, it turns into a staff for the Wand of Light. Aidan doesn't believe in the Wand even though he just saw what happened. However after Annika agrees to pay him, Aidan agrees to help and even knows someone who can help them find a gem.

After trading Annika's skates for a fake map, the group finds themselves in a large cavern filled with gems, where a sign tells them to take only what they need. Although they get 2 gems, Shiver causes a cave-in thanks to her amazement of the gems' sparkles, which they narrowly manage to escape. As Aidan starts to forge the Wand, he reveals that he ran away from his parents because he lost all of their money gambling. He wishes to return to them and ask for forgiveness.

Brietta offers her tiara to make the ring of love. With all three objects, the "Wand of Light" is assembled, and Brietta transforms back into her human form.

Annika and Brietta return to the Cloud Kingdom on two pegasi summoned by the Cloud Queen's bell, but Wenlock pursues them, hurting Brietta. Angrily Annika asks the wand to destroy Wenlock, but it does not work. Annika gives up and finally, she agrees to marry Wenlock if he changes her parents and her people back to normal. Wenlock refuses her, for she is hateful, just like his other wives. He sneers at her, taking the wand from Annika's hand and before flying off, he causes a snowslide, trapping Annika.

Immediately Aidan comes and helps to dig Annika out. Aidan and Brietta bring an unconscious Annika to the Cloud Kingdom. After Annika wakes up, the trio goes to Wenlock's place. Blush decides not to give the clouds a dusk color to give Annika more time after some persuasion by Rose. While Brietta guards the pegasus, Annika, Aidan, and Shiver slide to the green castle. Aidan fights against Griffin as Annika searches for the wand. When she finds the wand, suddenly the gem falls. Fortunately, Aidan gives Annika his extra one fixing the wand in no time.

Realizing how to work the Wand, Annika asks it to defeat Wenlock, for the love of her family and friends. Wenlock turns to be an ordinary person, and the spell on Annika's parents is broken. Annika shows them Brietta, and the entire family celebrates together, Annika apologizes to her parents for what she said to them before and they apologize for not telling her about her sister, while Aidan's father forgives him. Aidan makes Annika meet his father too. The end scene shows Aidan and Annika skating in the cloud palace. Both Aidan and Annika are wearing crowns, signifying that they have gotten married. Brietta remarks that they look happy and gifts the Cloud Queen with the Wand, who replies that it will be the first star at night.

Other characters include Wenlock's Griffin.

The scene selection feature can be accessed by selecting "My Favorite Scenes". 3D & 2D Version

The extra features can be accessed by selecting "Magical Fun"

Barbie and associated trademarks and trade dress are owned by and used under license from Mattel, Inc.

The theme song for the film, "Hope Has Wings", was performed by Brie Larson. The music for the film was composed by Arnie Roth. The orchestral music is from Haydn's Symphony no. 94, "Surprise" and Beethoven's 6th Symphony "Pastoral." 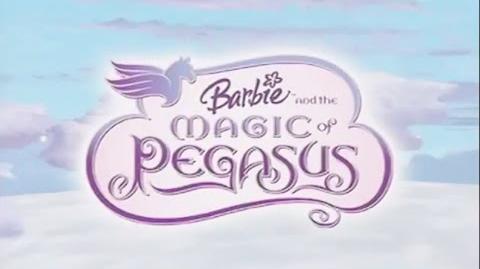 Barbie™ and The Magic of Pegasus - Official Trailer