Join Barbie as Corinne, a young country girl headed to Paris to pursue her big dream – to become a female musketeer! Never could she imagine she would meet three other girls who secretly share the same dream! Using their special talents, the girls work together as a team to foil a plot and save the prince. Come along on an action-filled adventure that dares you to dream as never before.

Corinne is a country girl from Gascony who dreams of being a musketeer in France. On 1560, she goes to Paris with a letter for Monsieur Treville, the captain of the musketeers and an old friend of her father, hoping to be accepted as a musketeer.

But being a musketeer is not easy for Corinne. She is made fun of, and hired as a palace maid, not a musketeer. She meets her co-workers, three other girls who also dream of being musketeers too: Viveca, Aramina, and Renée. The next day when they return to work, a chandelier drops, and Viveca, Aramina, and Renée show off their musketeering skills. Corinne also finds a small ruby and above finds that the rope has been cut.

An old maid named Hélène overhears their conversation and takes them through a secret passageway, where she leads them to the old musketeer training room, and agrees to train the four girls to be true musketeers. Soon the four girls are mastering their skills with Hélène's help.

One day, while Corinne is cleaning the windows, she spots the prince hanging from his flying machine and runs to help him. The prince thanks Corinne, but later, she finds that the rope has been cut, just like the chandelier!

One night, Corinne, Viveca, Aramina, and Renée decide to celebrate their musketeering skills and walk into the dark, quiet streets. They encounter a man who pulls out a knife, and Corinne realizes it matches the ruby she found next to the chandelier. They soon discover that the Regent's men were sneaking weapons into the masquerade ball to kill the prince!

The music in Barbie and The Three Musketeers was composed by Eric Colvin. The theme song of the movie is "All For One", performed by Keely Hawkes Pressly. Hawkes also performed another song in the film, "Unbelievable", and the third song featured in the movie, "Making My Way", was performed by Leslie Mills. 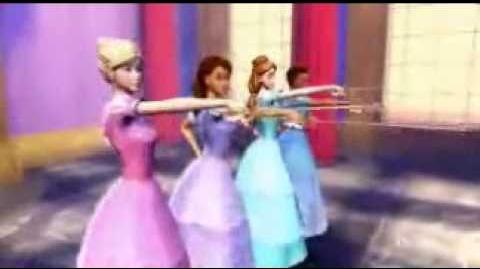 Barbie and the Three Musketeers-Trailer 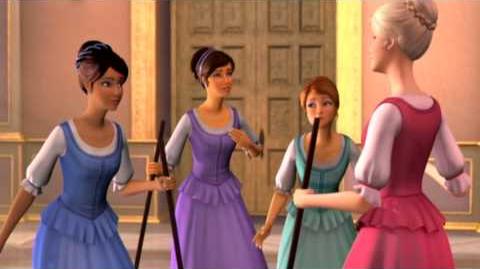 To promote the movie, Barbie participated in an exclusive interview for Amazon.com called "Barbie Talks About The Three Musketeers".

Leah Weathersby: This is Leah Weathersby with Amazon.com, and I'm chatting with Barbie. Barbie, thank you so much for talking with us.
Barbie: Oh, it's my pleasure, Leah.
Leah Weathersby: Well, the last time we talked, you had just wrapped up your movie Barbie in A Christmas Carol. What have you been doing since then?
Barbie: I've just wrapped filming on Barbie and The Three Musketeers, and this movie is a Barbie adventure like never before! My best friends, Teresa, Summer, Nikki and I are princesses on an adventure to save the prince. Along the way, we discover that, despite our differences, we have a common dream to become the first girl musketeers! This is a classic tale that we all know and love, but reinterpreted with a fun twist. From a hilarious cast of characters to a fabulous masquerade ball, the DVD is packed with unapologetically all-girl fun!
Leah Weathersby: Well, in your movie Barbie and The Three Musketeers, you play Corinne. Tell us about your character.
Barbie: Oh, I was so excited to play the role of Corinne, a countryside girl with big dreams to become a musketeer. I have a lot in common with her; we both dream big and believe that if you put your mind to it, anything is possible.
Leah Weathersby: This is your first time starring in a movie with your friends Teresa and Nikki and Summer. What's the best thing about working with best friends?
Barbie: Working with my BFFs makes me feel like the luckiest girl in the world! Despite our very unique talents and personalities, we all find a way to balance each other's strengths through a common bond: Girl power! Every girl deserves a great group of friends. Their own real life musketeers!
Leah Weathersby: I've heard you have some action scenes in this movie. Was it fun to learn swordfighting?
Barbie: Oh, it was such a blast! I'm always up for trying new things! I love exploring the world and all of its possibilities, not to mention my glittery sword was the perfect fashion accessory on set.
Leah Weathersby: In this movie, you and your friends save a handsome prince rather than waiting for a prince to save you. Is there a message you'd like your fans to take from this story?
Barbie: Barbie and The Three Musketeers gives girls a story that combines classic princesses with modern girl power. While I know girls love to play the princess, they also want to play the hero and save the prince, not be saved. After watching the movie, girls will be reminded that they can achieve anything they set their minds to.
Leah Weathersby: This movie is set in Paris. What was your favorite thing about filming in the city, and did you have any time for sightseeing?
Barbie: When filming in the fashion capital of the world, sightseeing and shopping are a must! From the Eiffel Tower to the Arc de Triomphe, my friends took in the sights, and of course snapped a few glamor shots along the way.
Leah Weathersby: Well, speaking of fashion, you're not just an actress but you're also a fashion muse, and you were recently honored at fashion week. What was it like seeing designers create clothes inspired by your style?
Barbie: It was an amazing honor. To participate in a runway show in the tents among some of my favorite designers was an experience I'll never forget. Fifty fabulous, iconic American designers from Diane von Furstenberg to Vera Wang all created amazing, one-of-a-kind looks inspired by yours truly! It was a tremendous honor. Christian Louboutin even made fifty custom pink heels for the occasion. It was a fashionista's greatest honor.
Leah Weathersby: Do you have any other new movies coming out soon?
Barbie: I'm excited about a new movie I'm filming called Barbie in A Mermaid Tale, which was filmed in my hometown of Malibu, California. I play a girl named Merliah, who's a surfer with a secret: She's also a mermaid! Make sure to look out for it in Spring 2010!
Leah Weathersby: Well Barbie, thank you again so much for talking with us and congratulations on your new movie.
Barbie: Thank you so much, Leah, it's always a pleasure.

Allusions to the original story

Retrieved from "https://barbiemovies.fandom.com/wiki/Barbie_and_The_Three_Musketeers?oldid=136737"
Community content is available under CC-BY-SA unless otherwise noted.