Barbie Live! in Fairytopia is the live stage version of the widely popular Barbie Fairytopia movie, released in spring 2005. It is a musical fully staged threatre production directed by Eric Schaeffer with original songs and dancing and has the characters from the film. It is two 30-minute acts divided by a 15-minute intermission. It toured 80 American cities from late 2005-2006.The songs in Barbie Live in Fairytopia were written by Susan Di Lallo and Robbie Roth, and a soundtrack album was released for the show with original sound recordings: Songs From Barbie Fairytopia.

The Pixies are flying and tease Elina, a wingless flower fairy, for not having wings, but Elina's friend Topaz convinces her that she has friends she just hasn't met yet. Elina goes to a fairy named Azura's cottage and Azura sees the rainbow in Elina's eyes. She tells her she has the "Fairytopia mark of greatness". Meanwhile, an angry evil fairy named Laverna and her loyal assistant Fungi create a spell that will cause flying sickness, the inability to fly, on the fairies of Fairytopia.

Elina wakes to find that her pink flower home is sick and her fairy friends cannot fly, and this is due to Laverna's spell. Elina thinks that Azura, a Guardian Fairy, can help, so she journeys to find her with Bibble, a puffball, and Hue, her butterfly friend. She's challenged along the way by the evil Laverna who wants to take over Fairytopia from the Enchantress, the ruler of Fairytopia. At one point, Laverna sends firebirds after Elina, who escapes and meets a merman named Prince Nalu in a place called Crystal Cove. It makes Elina realise the power of friendship and meets characters who test her courage.﻿ Along the way,Elina meets Dahila by showing her the friends she haven't met something Azura and Topaz told her about. Elina saves Fairytopia and the Enchantress gives her a gift,her very own fairy wings.

The production was created by Mattel and Clear Channel Entertainment, and director Eric Schaeffer thought the most important thing was to get children to go to the theatre. He thinks he got the call to do Barbie Live in Fairytopia because he did a 34-minute "Snow White" presentation in Disneyland.

Auditions for the show were held in New York City in December 2005. There was an open casting call from December 5 to December 7. Actresses from across the country that were auditioning for Barbie lined up outside the Good Morning America studios. They had to sing to Eric Schaeffer and were watched by other auditionees.

Erin Elizabeth Coors auditioned and eventually won the role as Barbie as Elina. Her agent submitted her and she was called back to represent the first ever human representation of Barbie. The final cast came together and rehearsed in early March. The actors were described as seasoned and experienced.

The award-winning production team worked hard to create awe-inspiring stage environments and it was rumored that over a 100 pounds of glitter had been used. There were aerial scenes that lasted for several minutes. The production was described as "incredible" by Erin Elizabeth Coors and "a once-in-a-lifetime experience".﻿

The character's outfits were designed by Tony-nominated costume designer Gregg Barnes and a team of other designers. Gregg Barnes was thrilled because he considers Barbie a fashion phonomenon. The costume for Elina includes 15,000 beads and sequins and over 30 types of fabric. Twenty people worked on the dress for over 350 hours. 11 sets of wings were made, as well as a mermaid tail, and costumes for other characters such as Hue and Fungi. All of the fairies have their faces exposed so their expressions can be seen. 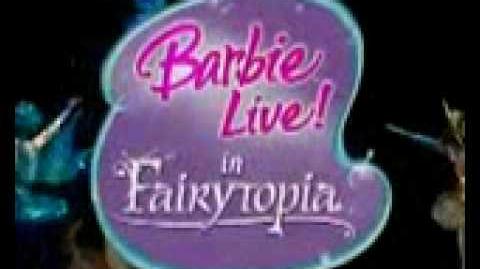 Barbie Live In Fairytopia Trailer
Add a photo to this gallery

Elina (Erin Elizabeth Coors) in the theater before the show was begin at Palace Theatre in Columbus, OH

One of the pixies in Fairytopia 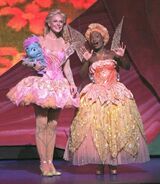 Laverna's appearance in this show

Laverna and the Fungus Maximus

The enchantress give the wings for Elina

Elina with her pink wings

Elina gets her wings and she can flying

Erin Elizabeth Coors sees her costume
Add a photo to this gallery
Retrieved from "https://barbiemovies.fandom.com/wiki/Barbie_Live!_in_Fairytopia?oldid=141469"
Community content is available under CC-BY-SA unless otherwise noted.