The song "So Beautiful" and "Live in the Moment" are featured in the film and "Treasure", was made for the film.

"While visiting Ken and exploring a coral reef, Barbie and her sisters make an amazing discovery and meet a mysterious new friend."

"Join Barbie™ and her sisters Skipper™, Stacie™ and Chelsea™ as they go on an adventure to a tropical island where Ken™ is doing a marine biology internship. While snorkelling, they discover a young dolphin trapped in an enclosure—but this isn’t just any dolphin, it’s a beautiful bright green Gemstone Dolphin! Barbie then meets a mysterious friend named Isla, who turns out to be a magical mermaid! Soon after, the girls discover that the dolphin is being held by Marlo, the biologist Ken is interning with. Her intentions are to make money by exhibiting the dolphin for its unique traits. They must work together to free the dolphin so he can be reunited with his Gemstone Dolphin family before Marlo sends him away."

Isla, a mermaid, is swimming with gemstone dolphins when a green gemstone dolphin named Emerald is captured. The gemstone markings on it and the other dolphins disappear. Heartbroken about its capture, Isla vows to go find him and told the other dolphins to stay. Barbie, her sisters, and their puppies arrive at their cabin at a tropical resort. They stay there while they visit Ken during his marine biology internship as a research assistant to Marlo. Barbie, Skipper, and Ken go diving, and Skipper takes an unclear photo of Isla.

Isla finds Emerald in captivity, but leaves when Barbie, Skipper and Ken arrive at the facility. Stacie, Chelsea and the puppies also arrive, after Stacie saw Emerald from their cabin. Ken tells Barbie and Skipper about the myth of the Gemstone Dolphins, and says that Emerald is in a pool for sick or injured animals to be rehabilitated. Emerald looks fine, so Barbie thinks he got into the facility by mistake. Barbie tries to free Emerald, but Marlo stops her.

Barbie, her sisters, Ken and Isla go to a buffet, and Skipper takes a group photo. The next morning, Isla and Barbie go swimming and one of the Gemstone Dolphins touches Isla's necklace, transforming her back into a mermaid. Isla tells Barbie to keep it a secret. Skipper and Stacie see Hugo arrive by helicopter, and go to tell Barbie so they can say bye to Emerald. Isla and Barbie wonder why they hear Emerald even though they're far from the cove, and Isla finds a cave with confusing tunnels that lead to Emerald.

Barbie's sisters overhear Marlo telling Hugo to transport Emerald to the mainland facility as soon as possible. Skipper realizes her photo of Isla is a photo of a mermaid, and she sees a photo of the logo on Hugo's helicopter. The Gemstone Dolphins find Emerald and Ken opens the gate for them. Marlo orders him to capture the dolphins. Marlo leaves, and Isla and Barbie find the dolphins. Ken tries to free them, but the code to open the gate has changed. Isla no longer trusts Barbie, and says she will free the dolphins by herself. Barbie's sisters arrive and Skipper says Hugo's logo is not for veterinary but for a sideshow company.

After trying the code again, a new code is sent to Marlo's master device. Barbie tells Ken and the puppies to distract Marlo while Chelsea gives the master device to Stacie and Skipper. Skipper syncs the device to her tablet and downloads the new pass code. Barbie apologizes to Isla, and Isla agrees to help. Isla reveals to everyone that she is a mermaid, and she gets in the pool with the Gemstone Dolphins. Marlo arrives and says she reprogrammed the master device, so the new pass code fails. Isla and the dolphins hide in the tunnels, so Barbie says they escaped.

Marlo and Hugo go to his helicopter to find Isla and the dolphins. Isla gives Barbie a shell that emits a signal, and tells Barbie to go to the other end of the tunnels and guide them through. Marlo and Hugo see them escaping, and pursue them. Barbie and Isla part ways, and Barbie gets caught in Isla's place. Barbie tells Marlo that a real marine biologist would use a research center to help animals, not exploit them. Hugo leaves in the helicopter, and Isla leaves with the dolphins. Skipper deletes her photo of Isla as a mermaid. Barbie and Skipper agree that the group selfie is the best photo from their trip, and Barbie reunites with Isla after using the shell that Isla gave her.

The characters also include the Gemstone Dolphins and the Roberts' puppies: Taffy, DJ, Rookie and Honey. 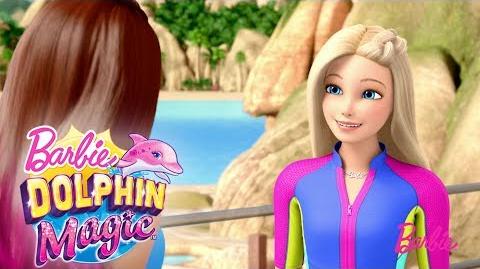 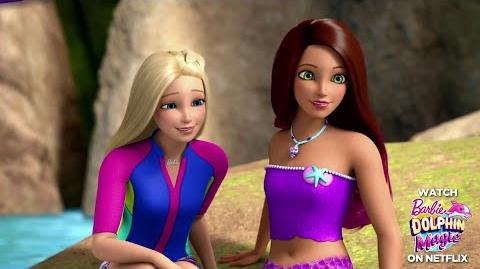 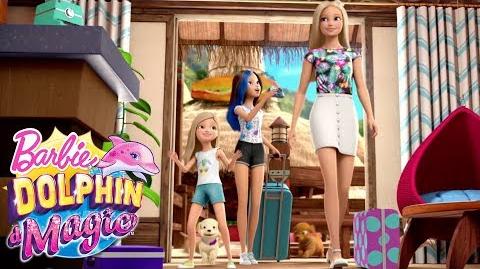 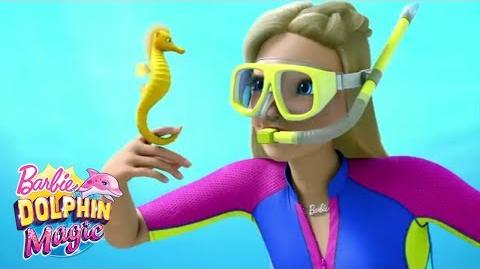 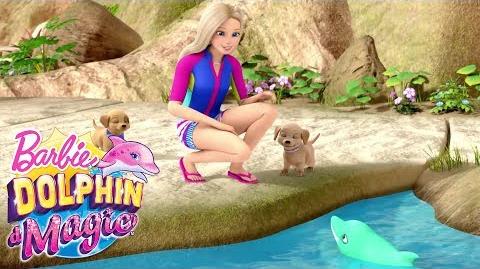 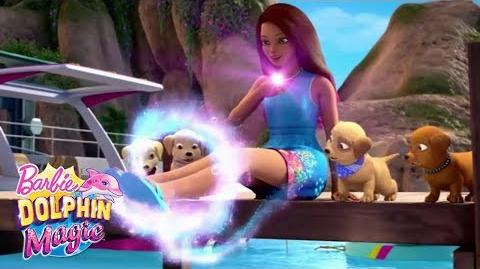 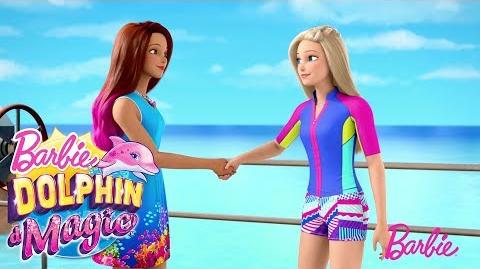 Barbie and Isla Make a Deal 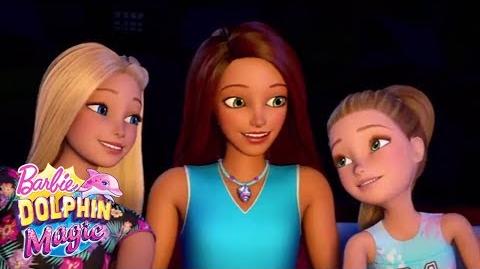 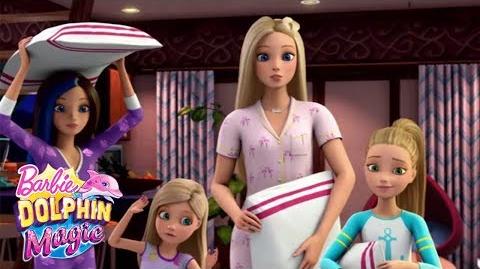 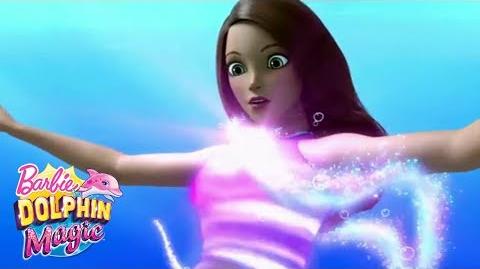 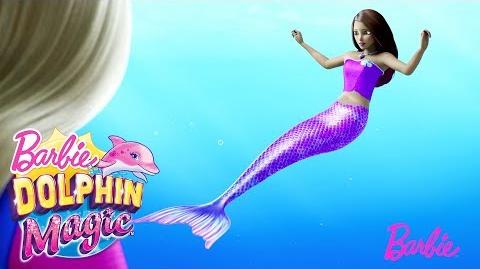 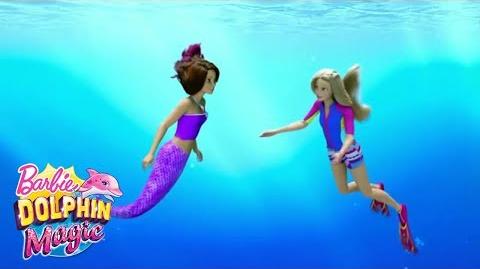 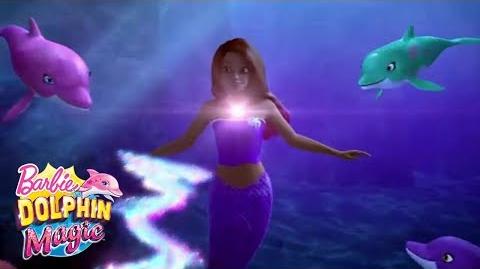 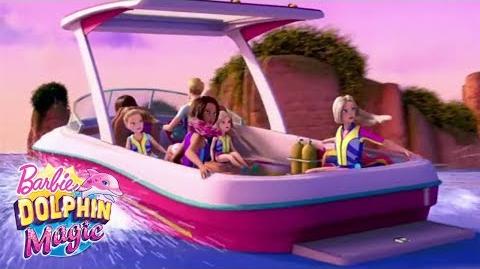 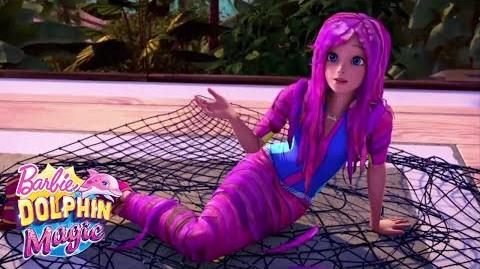 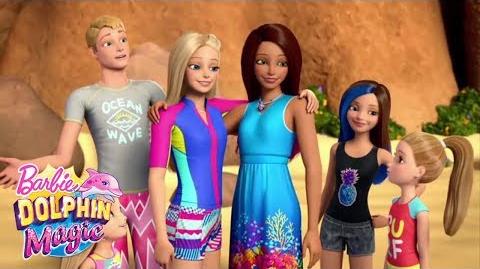 Ending Barbie™ Dolphin Magic
Add a photo to this gallery 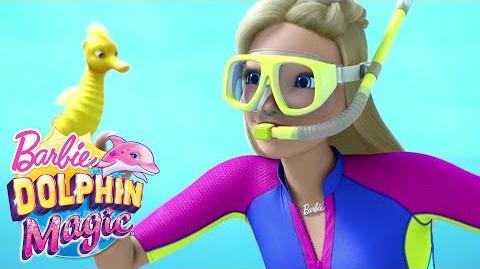 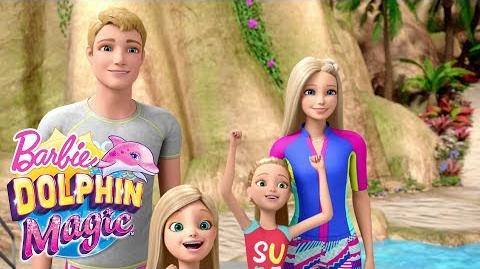 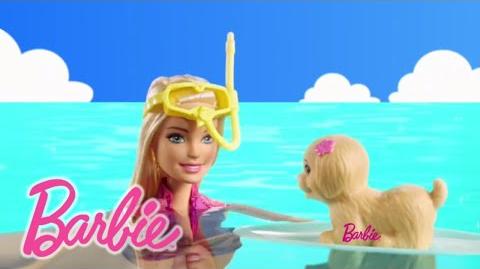 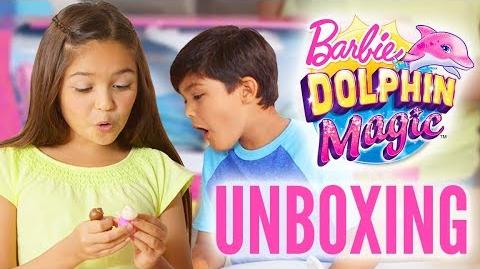 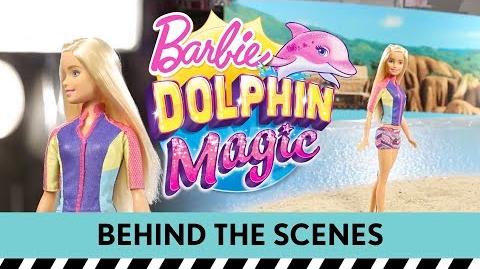 Dive Behind the Scenes on a Barbie Dolphin Magic™ Photo Shoot 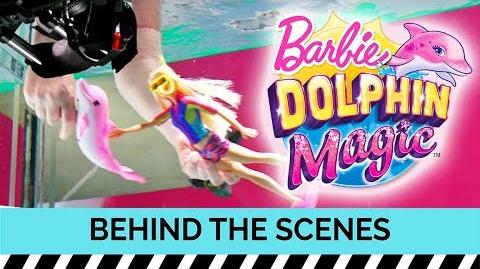 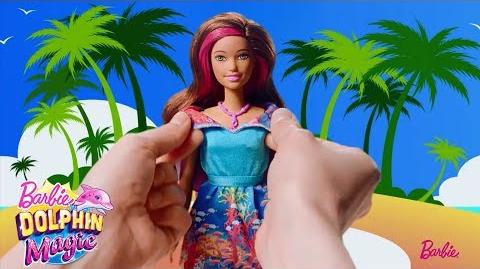 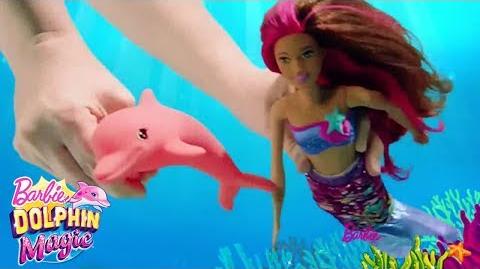 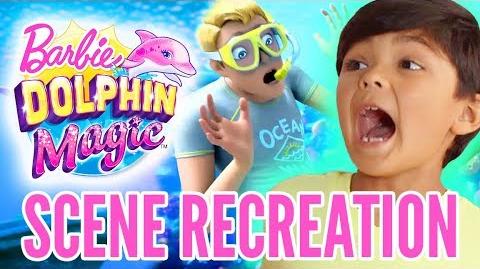 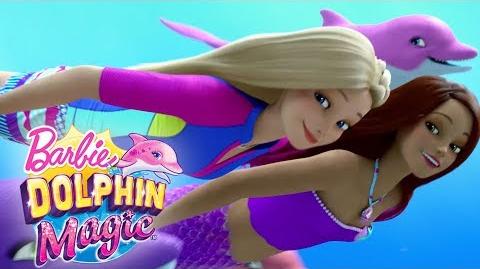 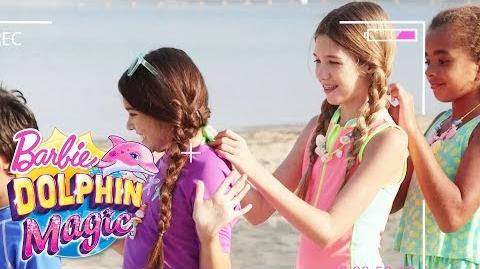 Behind the Scene at the DIY Costume Beach Shoot 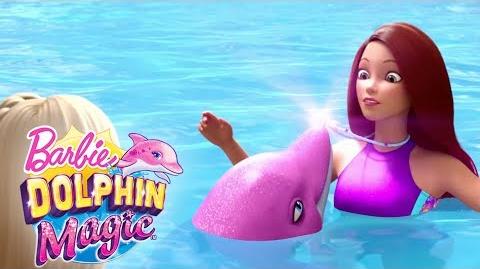 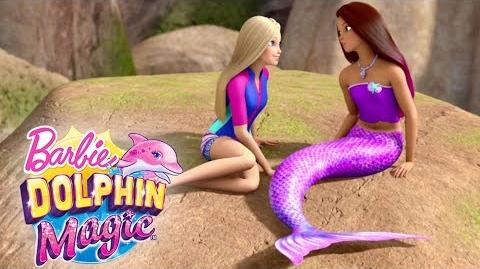 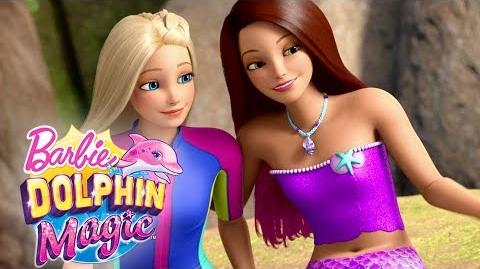 DIY Crafts
Add a photo to this gallery

Retrieved from "https://barbiemovies.fandom.com/wiki/Barbie_Dolphin_Magic?oldid=140197"
Community content is available under CC-BY-SA unless otherwise noted.