Barbie in A Christmas Carol

Barbie & The Diamond Castle is the 13th Barbie movie. It was released on September 2, 2008. It is a musical fairy tale about two girls named Princess Liana, played by Barbie and Princess Alexa, played by Teresa. It is a story about friendship and music.

"Barbie and Teresa tell us the fairy tale story of Liana and Alexa, best friends who share everything including their love of music."

"One day their simple lives change when they are given an enchanted mirror and befriend the girl trapped inside! To save their new friend, Liana and Alexa embark on a dangerous journey to the hidden Diamond Castle, that will put their friendship to the test. But through the power of song and with the companionship of two adorable puppies, the girls face their challenges together and learn that friendship is the true treasure."

The movie begins with Barbie and Teresa writing a song together on their guitars when Barbie's sister Stacie storms in, angry with her friend Courtney. Barbie decides to tell Stacie the story of two friends named Liana and Alexa, who also get angry at each other.

Although the two girls don't have much food and clothes, they have each other, love music, and depend on planting flowers to upkeep their living. They live in a cottage with a beautiful garden in the front yard. One day, they find a pair of heart-shaped stones in the river near their house, not realizing they are actually trinkets of the mythical Diamond Castle. Suddenly, a windy rainstorm occurs that destroys their garden.

When they go inside to stay out of the rain, they turn the heart-shaped stones into necklaces to symbolize their friendship. The next day, after sharing their bread and jam with an old homeless woman, she allows them to take one of her treasures in exchange and they pick a heart-shaped mirror, but neither of them know that it's the hiding place of Melody, an apprentice muse on the run from Lydia, who turned evil and turned the other two muses Dori and Phaedra into stone after they hid their home the Diamond Castle and left Melody the key. Since the Diamond Castle is the birthplace of all music, Lydia's finding it would mean the end of music and with it, eventually the world. Liana and Alexa coax a song out of Melody by singing and a flying serpent serving Lydia named Slyder is able to locate the young muse by her voice.

With their home burnt down by Slyder, Alexa and Liana head off with Melody to find the Diamond Castle and keep it safe from Lydia, finding two small puppies on their way. Liana names one Sparkles and Alexa names the other Lily. But with no food or money, they eagerly take the place of two wayward musicians at an inn that evening. The always-late musicians, twin boys named Ian and Jeremy hear the girls play and sing and instantly fall for them, but the girls leave them behind at the inn. No sooner are they out of the town than Lydia confronts them, using her magic flute to mesmerize them, but the stones on their necklaces, that are originally from the Diamond Castle itself protect them.

Unable to mesmerize them, Lydia sends Slyder to get them, but just before he can, the twins from the inn arrive on their horses, and the four of them give Slyder the slip. The women travel with the twins, who wind up running into a troll that they had managed to trick the last time they met. The troll vows to eat the boys this time unless the girls answer his riddle. They do, which not only frees the boys but reveals a rainbow bridge that carries the girls off, leaving the boys behind. Liana and Alexa continue to travel but soon run out of food and water.

Liana then spots a mansion in the middle of a wood, and when they go in there for shelter, the servants of it, who are under Lydia's power, tell them that they're the house's prophesied owners and that a legend about two best friends has been foretold. Delighted to finally have more food to eat and more clothes to wear, Alexa decides to abandon the plan to help Melody, but Liana wants to honor the promise they made to Melody, and to this, the two get into an argument. After that, Liana leaves while Alexa stays, ripping off her necklace for her friend's apparent betrayal.

Almost as soon as Liana's gone, Slyder arrives and takes Alexa to Lydia. Alexa tells Lydia that Melody is not with her, and Lydia jesters Slyder over, who sniffs Alexa's basket for the mirror when suddenly, Lily attaches herself to his teeth with her tongue. He swings the puppy around, sending her flying across the ground. After hearing from Slyder that there's no mirror, Lydia asks Alexa, "Where is your friend? Or should I say, ex-friend?" Alexa acts as if she doesn't know where Liana is, and Lydia pulls out her flute to mesmerize her, but Alexa tells her that it does not work on her. Lydia then says, "Bold words for a girl who no longer wears her necklace. As long as you and your friend wore your guardian stones, you were protected. But now..." And she plays her flute on Alexa to get Liana's location, and because Alexa is no longer wearing the heart-shaped stone which would've protected her, she is easily put under Lydia's power. Alexa tells Lydia that Liana and Melody are heading to the seven stones (the place where the Diamond Castle is hidden), and Lydia sends Slyder to capture Liana.

After Slyder captures Liana, Lydia uses mesmerized Alexa to threaten Melody into telling her where to find the Diamond Castle. Although Lydia promises to release Liana and Alexa once the Diamond Castle is hers, Slyder knocks the two girls over a cliff, and they very narrowly escape falling into some kind of glowing, green lava-like acid. Lily tosses Alexa's necklace down to Liana, and she uses it on Alexa to undo Lydia's spell. After that, they manage to climb up the cliff when Sparkles leads the twins to where they are, and together, they all head to the Diamond Castle's hiding place.

Meanwhile, Melody keeps Lydia busy by claiming that the key to the Diamond Castle is to place rhinestones in the crevices of the rocks in a certain order, and by the time Lydia catches on, the girls and the twins have a plan of their own set in place. The twins lure Slyder away and keep him distracted while the girls pretend to fall under Lydia's mind-control spell by hiding their necklaces under their shirts. Lydia creates a whirlpool with her flute in a perfectly round pond and commands the girls to jump in and drown, but Liana snatches Lydia's flute instead. Lydia counters by threatening to break the mirror Melody's in, but Melody breaks it herself rather than letting the Diamond Castle fall into Lydia's hands. Liana throws Lydia's flute in the whirlpool, and Lydia wades in after it but gets caught in the flow. She tries to cast a spell to stop the whirlpool, but her waterlogged flute backfires, and she seemingly disappears in a flash of light.

After that's over, Liana and Alexa realize that the song Melody sang earlier is the key, and their singing reveals the Diamond Castle. Stepping onto the castle's bridge changes everyone's clothes to more regal bearings and releases Melody from the mirror while the puppies become sparkly. Melody leads Liana and Alexa to the muses' instruments, but Lydia and Slyder aren't entirely gone, later returning and attacking. Melody saves the instruments from being destroyed, and the girls play and sing, creating a barrier that turns Lydia's spells against her, turning both her and Slyder into stone and bringing peace to the Diamond Castle at last.

With Lydia vanquished, the muses, Dori and Phaedra, return to life and return to the castle. They bestow the title of Princesses of Music to Liana and Alexa, promote Melody to a full muse, give Jeremy and Ian blue rocking electric guitars, and have sparkly tiaras placed on the puppies' heads. Although Melody would love for Liana and Alexa to stay at the castle forever, Alexa says, "Once I would've said yes in the blink of an eye, but now, I just want my old home back. It was more than enough." So the muses give them magical flower seeds to plant in their garden and send them on their way.

When they're home, Liana and Alexa plant the magical flower seeds, and soon beautiful flowers grow which have diamonds on them while Jeremy and Ian are successful in their performances with their electric guitars. When the story ends, Stacie realizes nothing can break true friendship, apologizing to Courtney, and Barbie and Teresa resume their guitar playing. 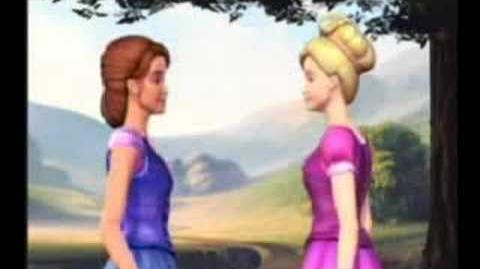 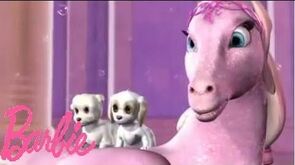 Barbie and the Diamond castle official behind the scene 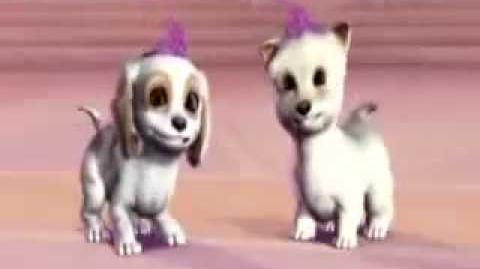 Retrieved from "https://barbiemovies.fandom.com/wiki/Barbie_%26_The_Diamond_Castle?oldid=150252"
Community content is available under CC-BY-SA unless otherwise noted.