Barbie Movies Wiki
Register
Don't have an account?
Sign In
Advertisement
in: Barbie & Her Sisters in the Great Puppy Adventure, Arc Productions, Movies

"Barbie and her sisters, Skipper, Stacie and Chelsea, and their adorable new puppy friends find unexpected mystery and adventure when they return to their hometown of Willows. While going through mementos in Grandma's attic, the sisters discover an old map believed to lead to a long-lost treasure buried somewhere in the town. With their puppy pals in tow, the four girls go on an exciting treasure hunt, along the way discovering that the greatest treasure of all is the love and laughter they share as sisters!"

Barbie and her sisters went to stay in Willows for a fortnight because they were starting summer vacation. Barbie drove them there in their pink camper. Being the youngest, Chelsea didn't remember Willows, but Barbie remembered it well. She looked forward to spending time with Grandma Roberts, who they were staying with, and going to Willowfest with her childhood friend Christie.

The sisters went upstairs to their old rooms, which had the same beds and photos. There were no photos or beds for Chelsea because she slept in a crib. Chelsea was going to sleep in Skipper and Stacie's old room. They all went to the attic to see if they could find anything of Chelsea's. Chelsea found a cradle for the puppies. Skipper found a treasure map.

Grandma said that the treasure was buried by the town's founders for a time of need so that Willows would always prosper. Barbie's sisters wanted to go on a treasure hunt, but Barbie wanted to spend time with Christie. Skipper took photos of the map on her tablet, and they began searching for the treasure the next day.

Barbie met Christie at Willowfest. They wanted to go on their old favorite ride, the Storminator, but it was shut down. Joe and Marty heard Skipper, Stacie, and Chelsea talking about treasure and decided to follow them so they could find the treasure and have it for themselves.

Grandma said the search begins where the town began, leading Skipper and her sisters to the town hall. They met Mayor Jenkins there, who almost tripped on a broken step because many things in the town were in disrepair. They see a plaque with the Willows emblem at the city hall that says: "Let the willows be your guide."

The puppies asked a dog named Jack for help. He wanted to sleep, but he touched another plaque to make a secret panel in the ceiling of the city hall's porch appear. The panel said, "We came from afar to this great land, carrying the future in the palm of our hand." Skipper used her tablet to find a photo of the founding fathers, and one of them was holding a vase with a twig in it. The twig was from the first willow tree, so they asked the mayor to show them the vase. There was a willow tree charm in a secret compartment on the bottom of the vase, so Stacie put it on a necklace in case they needed it later. A mirrored message on the vase read, "What runs for miles and never gets tired?"

Barbie found out that Christie had to move away because her parents couldn't afford to live in Willows anymore. She told Grandma over dinner that there weren't as many rides at Willowfest as she remembered, and Grandma responded that Willowfest had gotten small over the years. Mayor Jenkins had considered canceling it. After dinner, Grandma showed her granddaughters some home movies. Chelsea was a baby in them, and all of the sisters were in the movies with Christie.

The next day, Barbie went out with Taffy to relive good memories. The younger sisters and their puppies solved the latest riddle and figured out that the answer was Lake Willows. From the Ferris wheel at Willowfest, Joe and Marty noticed the girls at the lake and decided to follow them so they could begin finding the treasure for themselves.

At the water fountain, a plaque said: "Where the water flows, the willow grows." There was another plaque they couldn't reach, so Stacie used a coin from the fountain to hit the emblem on it. It made a door open at the bottom of the fountain. The next clue said, "Slowly progressing like a midday chime. The growth of a tree is a reflection of time". The clock tower was reflected in the fountain, and it was almost noon, so they went to the clock tower. Joe and Marty followed.

The town clock is like a music box. Little wooden animals and people popped out of its front doors at noon. The clock chimed and played a song. The girls stayed for hours but couldn't figure out the next clue. They returned to the clock tower every day, and so did Joe and Marty, but no one could figure it out. One day, Stacie figured out that the chiming bells play a song. Skipper played the song on her tablet. The lyrics were the next clue: "Everything you need. Lies beneath the willow tree." They went to the first willow tree, and the puppies dug. While the girls were distracted, Joe and Marty took Skipper's backpack and her tablet, which she had documented their findings on.

Barbie noticed that almost everything in Willows was closed or needed repairs. The next day, she joined the treasure hunt. Skipper's tablet was gone, but they still had the original map and the willow tree charm on Stacie's necklace.

There were song lyrics on the map. Barbie read the second verse: "Meet me there at three. By the shady willow tree."

At three o'clock, they stood in the shadow of the town's first willow tree. The sun shone off the clock tower and cast a sunbeam on the grass, so the puppies dug and found another plaque with the Willows emblem. The plaque was mixed up like a puzzle, but Chelsea solved it. The ground rumbled and suddenly, a tunnel opened in front of them.

They went into the tunnel and ended up in a giant cave. They crossed a rickety rope bridge, and on the other side, there was a steep cliff. Joe and Marty had caught up with them, so there was no time to use the elevator. Barbie and her sisters used harnesses to jump off the edge of the cliff. They reached the bottom of the cave to be met with another plaque on the cave wall. Stacie pressed it, and a wall shook, then revealed an underground lake.

At the shore, there was a locked door to a giant vault. They used the willow tree charm as the key to the lock, and the door opened. The room was filled with treasure, but Joe and Marty tried to take it. While collecting treasure, Joe touched a gold plaque set in the ground, so there was a rockslide, and then they were all trapped inside the vault.

Taffy got separated from everyone, so, from outside, she touched a Willows emblem and unlocked the door. The puppies tied up Joe and Marty, and the girls met with Grandma and the police outside the cave. Joe and Marty were taken to jail, and the girls donated the treasure to the city. They had some treasure as a reward, but the donation saved the city. Christie's family was able to stay in Willows because her father got a new job; the stores reopened, and the stairs on the town hall were repaired.

The sisters celebrated at Willowfest, and when they were ready to go home, they took the puppies with them. Tiffany said she would visit whenever Grandma Roberts could. The girls created a new treasure hunt with their reward treasure by hiding the treasure and making a new map to give the townspeople something to believe in.

Special features on the physical releases of the movie include: 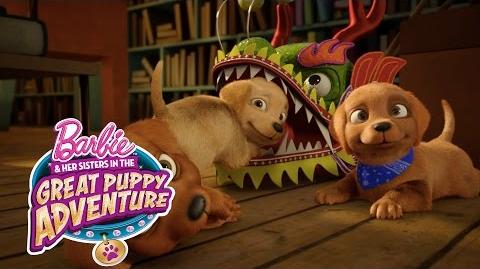 Barbie & Her Sisters in The Great Puppy Adventure Barbie 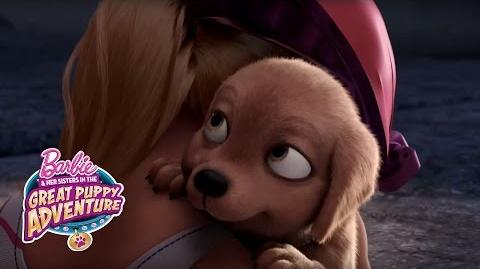 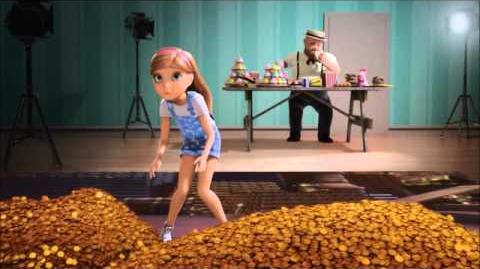 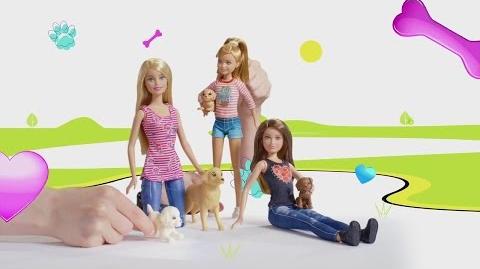 Barbie™ & Her Sister In The Great Puppy Adventure - Doll Commercial