Barbie Movies Wiki
Register
Don't have an account?
Sign In
Advertisement
in: Movies, Barbie & Her Sisters in A Puppy Chase

Barbie & Her Sisters in A Puppy Chase is the 34th Barbie movie. It was released to home video on October 18, 2016,[2] and it made its TV premiere on Nickelodeon on November 13, 2016.[3] Barbie and her sisters go to an island so that Chelsea can be in a dance competition. They bring their puppies with them, but the puppies go missing. Barbie and her sisters have to work together to find the puppies before Chelsea's competition starts. The theme song of the movie is "Live in the Moment".

"A fun-filled tropical adventure: Barbie and her sisters discover everything's better when you do it together in this splashy, sun-kissed adventure! After the girls and their pets arrive at an island paradise for Chelsea's big dance competition, they decide to make a quick side trip to see the nearby Dancing Horse Festival. But when their furry friends go missing at the event, it's up to the sisters to find them before Chelsea's show. While the puppies are out having an adventure of their own, the girls must use their imaginations and work together to find their furry friends in this tail-wagging good time!"[4]

Barbie and her sisters Skipper, Stacie, Chelsea fly to an island so that Chelsea can compete in a dance competition. They are accompanied by their puppies, Taffy, DJ, Rookie and Honey. Skipper and DJ feel sick on the plane. They land and are greeted by an island hostess, who gives the girls leis. The hostess gives the puppies flowers to wear on their ears.

Chelsea's dance competition rival, Lindsay, arrives shortly after them. Chelsea says she needs to rehearse as much as possible to compete with Lindsay, so she wants to go straight to the hotel. Skipper and Stacie also want to go to the hotel, but Barbie wants to surprise them first.

Barbie goes to a car rental company to get transportation. A woman named Hannah gives the girls a golf cart because most of the cars are already reserved. The girls send their bags ahead to the hotel, and drive towards Banyan Tree Park. Skipper feels sick as she sits facing backward while Barbie drives. They lose their map, and there is no internet connection for them to use GPS.

Barbie and her sisters find Banyan Tree Park, named after a large banyan tree with an arch that people can walk through. Barbie reveals that the surprise is the Dancing Horse Festival. She lets the puppies out to play while she and her sisters watch the the horses perform. A horse trainer named Vivian brings out a young horse named Beauty. Beauty gets nervous, as it is her debut performance, but Chelsea and Barbie cheer her on. Beauty performs well, and asks her mother, Silver, if she was watching. Beauty's sister, Spirit, says she will do better. Barbie and her sisters enjoy the performances.

The puppies find the horse trailer, and play in it until they are interrupted by Archibald, a show dog who says it is his trailer. After the show, Stacie asks a horse trainer named Marco if he can recommend any fun beaches. He recommends White Sands Campground, where you can go surfing. Vivian and Marco leave and start to drive away, not knowing that the puppies are still in their horse trailer.

The girls realize the puppies are missing, and Barbie tries to use the golf cart to follow the trailer. Barbie attempt to take a shortcut through the arch of the banyan tree, but the golf cart gets stuck. The trailer leaves, it gets dark outside, and the girls still have no internet. They decide to camp in the park, even though Chelsea wants to go back to the hotel to rehearse for the competition. Stacie says that Marco and Vivian are going to White Sands Campground; Barbie says they can hike there the next day.

After looking in the golf cart, Barbie finds some water and blankets that Hannah left them. They eat energy bars that Stacie keeps in her small bag. The girls play the What If game and the Imagination game, where they imagine different scenarios such as having a luxury camper. They hear a macaw bird, and Barbie tells her sisters about the macaw constellation that native fishermen used to navigate the seas by night. Barbie and her sisters fall asleep, but it starts to rain, so they sleep in the golf cart. Meanwhile, Archibald reassures the puppies that the girls will find them the next day.

In the morning, Barbie says the plan is to hike up to the main road, call for help, get the puppies, and then go back to the hotel before the dance competition. They find that the road is washed out. Barbie spots a mountain and says they will hike up it instead. Vivian and Marco discover the puppies are in the trailer and say they will take care of them until they can reunite with the girls. The puppies have breakfast and then go for a run with the horses.

Barbie and her sisters climb a mountain using teamwork, and then use a zip-line to get to a village. Barbie goes to another car rental company and meets Hannah's identical sister, Anna. She offers them more golf carts before letting them rent a camper like the one they imagined the night before. After getting lost while driving and having to change a tire, the camper runs out of gas. They get out of the camper and see the horse trailer at White Sands Campground, but the puppies are nowhere to be found. The puppies are playing on the beach, and decide to go surfing. Taffy worries that she will forget how to swim, but Honey tells to remember what their mother taught her.

While Skipper and Stacie search for the horse trainers, Barbie and Chelsea wait behind. Chelsea gets upset about potentially missing the competition. She also gets annoyed at Barbie for being positive all the time. Barbie comforts Chelsea, saying that no one can control what's going to happen all the time. She suggests that they play the Everything Stinks game. Chelsea worries that she will make mistakes during the competition or lose. Barbie tells Chelsea doing her best at the competition is more important than winning, and they hug.

The girls and the puppies spot each other while the puppies are surfing, and they all reunite. Vivian and Marco say they will transport the girls and their puppies to Chelsea's dance competition, but they come to another washed-out road. Spirit says the horses can help, and they get Marco's attention. Barbie and her sisters use the horses to cross the gap in the road and get to the competition. Beauty gets nervous about jumping, but she can do it after some encouragement.

Vivian says she will drive around a different way and meet the girls at the competition. Barbie and her sisters stay on the horses and come to a crossroads. Barbie accidentally picks a path that leads back to Banyan Tree Park. Barbie apologizes to her sisters for not just going straight to the hotel the day before and says she hid her own worries so that she would seem reliable to them. They tell her she can let them know when she's worried and say they had fun looking for the puppies.

Barbie looks at the stars and sees the macaw constellation. The constellation points north, where the competition is, so they use it as a map. They get there with enough time for Barbie and Chelsea to change clothes. Chelsea is late, and Lindsay and the other dancers have already performed. Chelsea pleads with the host, Savannah, and the puppies do puppy eyes. Savannah says Chelsea deserves a chance to perform, and Lindsay agrees even though she would've got the trophy had Chelsea not shown up.

Chelsea gets nervous while performing, so Beauty joins in. Beauty's sister Spirit also joins in, so Barbie gets on stage to try and stop her. Chelsea tells Barbie to dance. Skipper, Stacie, the puppies, Silver, and Archibald also end up dancing on stage. Savannah praises Chelsea's performance, and the judges award Chelsea the trophy with Lindsay's support. Chelsea thanks everyone who helps her, including Savannah, who says she is also Hannah and Anna's sister. Archibald turns Chelsea's performance music back on, and everyone dances.

Other characters include Tiffany and the dancers.

GO ON A TROPICAL ADVENTURE WITH BARBIE™ IN AN ALL-NEW MOVIE!

UNIVERSAL CITY, Calif., Aug. 2, 2016 /PRNewswire/ -- SYNOPSIS: Barbie™ and her sisters discover everything's better when you do it together in this splashy adventure!  After the girls and their pets arrive at an island paradise for Chelsea's™ big dance competition, they decide to make a quick side trip to see the nearby Dancing Horse Festival. But when their furry friends go missing at the event, it's up to the sisters to find them before Chelsea's™ show. While the puppies are out having an adventure of their own, the girls must use their imaginations and work together to find their furry friends in this tail-wagging good time!

Blu-ray™ unleashes the power of your HDTV and is the best way to watch movies at home, featuring 6X the picture resolution of DVD, exclusive extras and theater-quality surround sound.

DVD offers the flexibility and convenience of playing movies in more places, both at home and away.

KIDTOON FILMS SCREENING: Barbie™ and Her Sisters in a Puppy Chase will be on the big screen for family matinees as the featured Kidtoon Films title, playing at Showcase Cinema theatres Saturday and Sunday, November 19th and 20th. For more information and tickets, visit www.facebook.com/KidtoonFilms. 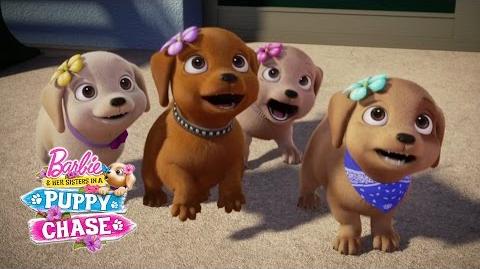 Barbie & Her Sisters in a Puppy Chase Teaser 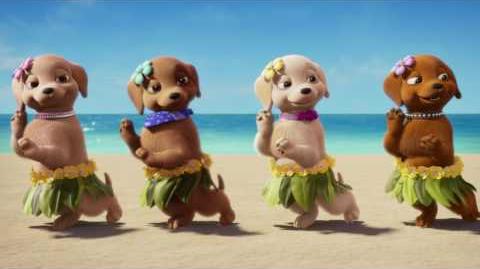 Barbie & Her Sisters in The Puppy Chase - Trailer 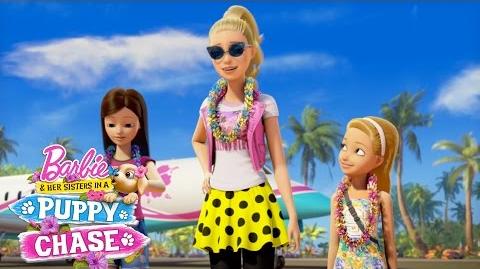 Welcome to the Island! Barbie & Her Sisters in a Puppy Chase Barbie 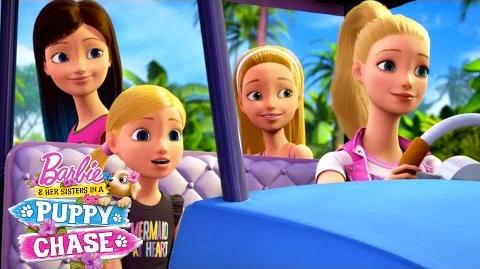 A Dancing Horse Festival Surprise! Barbie & Her Sisters in a Puppy Chase Barbie 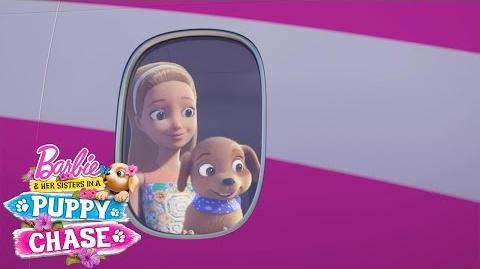 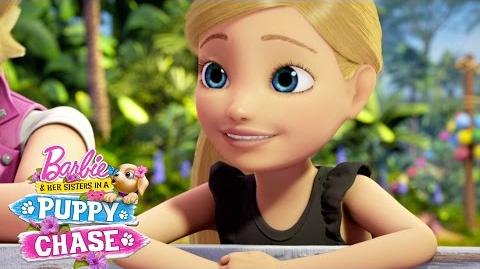 You Can Do It Beauty! Barbie & Her Sisters in a Puppy Chase