Barbie: Star Light Adventure is the 33rd Barbie movie and the first under Mattel Creations. It was released by Fathom Events in selected movie theaters/cinemas on July 30, 2016. It was released to home video on August 29, 2016, and it made its TV premiere on Nickelodeon on October 2, 2016.[1] The soundtrack was released on August 26, 2016. Despite using Barbie as the protagonist's name, Star Light Adventure marks the last movie not about the Roberts family's personal life.

"JOIN BARBIE ON AN OUT OF THIS WORLD ADVENTURE!

Barbie is a cosmic princess who flies high on her hoverboard through a far-off universe with her adorable and devoted pet sidekick, Pupcorn. One day, everything changes when the twinkling stars start to dim and slow their dance in the sky. Barbie travels to a beautiful new planet to join a special rescue team on a mission to save the stars. Once there, she teams up with a group of talented new friends who work together to save the galaxy through exciting hoverboarding adventures. Barbie soon discovers that if she listens to her heart, and with the help of her friends, she might be the leader the whole universe has been waiting for!"

The movie opens with the narrator telling about the prophecy that showed how the galaxy will have no more light as the stars slowed down their dance. All are worried as this prophecy might come true. A wise king named King Constantine sends a message for young people who can help restore the stars.

Not far away from the kingdom, a teenage girl, Barbie lives in a modern tree house with her father and pet, Pupcorn. It was Barbie's mother's wish that her daughter would grow up in a beautiful and peaceful place like Para-Den. She died when Barbie was little but she left behind a locket with the song she used to sing to Barbie when she was scared. While exploring the lush-green forests, Barbie's hover board crashes, and she fixes it. She then does her training, distracted during it. By dinner, a message arrives, stating that King Constantine wants volunteers to help him restore the stars. When her father tells her the volunteer he wants is Barbie, she thinks she can not do it.

After dinner, Barbie and Pupcorn look at the night sky while her father tells her about her mother calling her "Little Starlight" and gives her advice to listen to her heart. Barbie is still in doubt but then listens to the song and then decides to go and help the King.

The next morning, her father dropped Barbie off and gave her her bag with some important things inside, such as Pupcorn and a new pink hover board. On her way, she runs into Prince Leo. He picks up her bag while they disappear and are teleported straight into their rooms. When she and Pupcorn are in the bedroom, some tiny girls inform her where she is and how to get to the ballroom for the event. In the evening, she opens her bag to find a beautiful dress and a letter her father kept in. She reads the letter and finds out it was her mother's dress. She wears it only to find out it was too big. The dress fits automatically to her size.

Although Barbie was running late and wasn't allowed to run, she had no other choice but to run as fast as possible to be there on time. Artemis had been announcing the names, including Barbie. As she arrives, everybody was waiting for her to appear. Barbie hesitates at first but then is pushed forward and walks with pride and bows to the King. In the ballroom, Barbie befriends some other members of the same team: Prince Leo (known as the Fly-boy and only Boy of the team), Sheena, Kareena, and Sal-Lee.

Sal-Lee takes Leo to dance, only to go away as he couldn't dance to the beat and steps on her feet. Barbie notices and tells him how to be on the beat. Barbie unknowingly changes the boring song playing then, only to the King's disappointment. He gets mad at her for changing the rules. She had a conversation with her father, telling him she thinks that the King hates her. Her father encourages her.

She goes for training and meets Sal-Lee. When the sun rises, Barbie realizes that she overslept by not hearing her alarm clock and again arrives late for the training on her first day. The first part of the training tests defense reflexes, and it stars Barbie v/s Prince Leo. Barbie shows exceptional performance, and Leo is asked to sit out. The next part of the test is reaching the destination and completing the race on the hoverboard.

The next day, King Constantine sends Sheena and Kareena on one final test with Barbie, Sal-Lee, and Leo. They travel to a planet in the more desolate reaches of the galaxy to search for a Starlian. They find the last known location of the Starlian, and Sheena and Kareena suggest using Leo as the bait. The team creates a song to lure the Starlian into a trap. Barbie frees the Starlian, thinking that the King wants to keep it in his zoo where it wouldn't be able to survive. The King dismissed Barbie from the team and informs the team that they need the Starlian because they need it to protect them from magnetic storms on their way to the center of the galaxy.

After protesting and fearing that the King had not mentioned it, Sheena and Kareena try to persuade the King to change his mind, but he dismisses them for the evening. Sal-Lee tells the King that Barbie is a leader and makes the team a real team. The King disagrees, then takes Barbie back in the team as she showed up with a Starlian. The whole team sits down on a couch, being nervous about Mission Day. Leo finds a guitar and starts playing a song to lighten the mood but offers Barbie to play something. She sings the song that her mother always sung to her when she was afraid, and soon her friends joined her.

On the central planet, Sheena and Kareena use their powers to take everyone down closer to the planet's center. They find the heart of the galaxy, and after the Stat-o-Tron fails, Barbie dances and uses her powers to reset the stars, and then the magnetic storms clear.

Sheena, Kareena, Sal-Lee, Prince Leo, and Barbie, now crowned as Princess Starlight for her achievements, celebrate their victory when Babie's father appears there and is very proud of his daughter. The movie closes with the King now not being mad at Barbie and dancing along with the rest of the team.

TRAVEL OUT OF THIS WORLD IN AN ALL-NEW BARBIE™ MOVIE!

UNIVERSAL CITY, Calif., June 29, 2016 /PRNewswire/ -- SYNOPSIS:  Barbie™ is a cosmic princess who flies high on her hoverboard through a far-off universe with her adorable and devoted pet sidekick, Pupcorn. One day, everything changes when the twinkling stars start to dim and slow their dance in the sky. Barbie™ travels to a beautiful new planet to join a special rescue team on a mission to save the stars. Once there, she teams up with a group of talented new friends who work together to save the galaxy through exciting hoverboarding adventures. Barbie™ soon discovers that if she listens to her heart, and with the help of her friends, she might be the leader the whole universe has been waiting for!

The Blu-ray™ Combo Pack includes a Blu-ray™, DVD and Digital HD with UltraViolet™.

FATHOM EVENTS SCREENING: Barbie™ StarLight Adventure is coming to movie theaters nationwide for a special one-day event on Saturday, July 30 at 10 a.m. local time, through Fathom Events. Audiences will get to enjoy the full feature along with an exclusive introduction from Barbie™, deleted scenes, a special interview with a NASA astronaut, and the "Firefly" and "Shooting Star" music videos with lyrics so you can sing along! For tickets visit www.FathomEvents.com.

The songs in the movie are:

The official soundtrack was released on August 26, 2016.

The bonus features are: 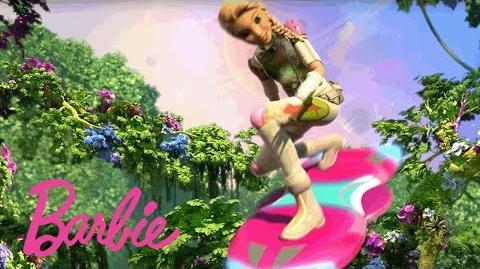 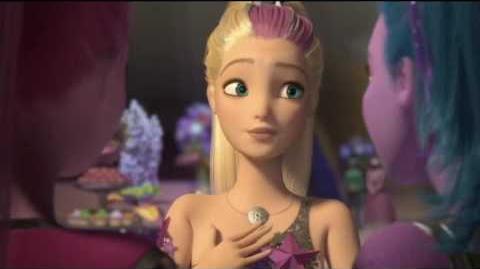 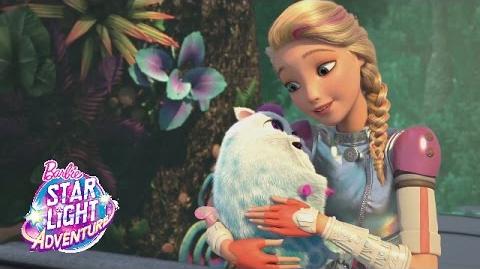 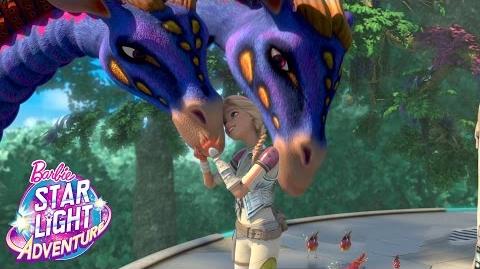