Barbie & Her Sisters in A Pony Tale

Barbie: Mariposa & the Fairy Princess is the 25th Barbie movie. It was released to DVD on August 27, 2013, and it made its TV premiere on Nickelodeon on November 24, 2013.[1] It is the 5th and final Barbie: Fairytopia movie. The film continues the journey of Mariposa with her new friend Princess Catania in a new adventure.

"Mariposa and her furry friend Zee returns in Barbie: Mariposa & the Fairy Princess. In this magical adventure, Mariposa becomes the royal Ambassador of Flutterfield and is sent to bring peace between her fairy land and their rivals, the Crystal Fairies of Shimmervale. While Mariposa doesn't make a great first impression on their King, she becomes fast friends with his shy daughter, Princess Catania. However, a misunderstanding causes Mariposa to be banished from the fairy land. As Mariposa and Zee return to Flutterfield, they encounter a dark fairy on her way to destroy Shimmervale. Mariposa rushes back and helps Princess Catania save her fairy land and together, the two girls prove that the best way to make a friend, is to be a friend."

Mariposa and Willa went to see Queen Marabella, who sent Mariposa to the kingdom of Shimmervale to make peace with the Crystal Fairies. The Crystal Fairies and the Butterfly Fairies had been feuding with each other for centuries over misunderstandings, but Mariposa was not prejudiced. Even so, she was too unconfident to go, and had to be encouraged by Prince Carlos. Willa helped Mariposa to pack and Mariposa and her pet Zee went to Shimmervale.

When Mariposa arrived in Shimmervale, she was hesitantly greeted by Talayla, who was scared of Mariposa at first because of incorrect, frightening misconceptions about Butterfly Fairies. Talayla showed Mariposa around the kingdom once she was reassured that Mariposa wouldn't hurt her. The other residents of the kingdom, however, hid from Mariposa, making her feel uncomfortable. The princess of the kingdom, Catania, greeted Mariposa, but her father King Regellius told Catania to stay away from the window.

Talayla showed Mariposa her guest room and then was formally introduced to King Regellius and Princess Catania. The king was unimpressed by Mariposa, and meanwhile in Flutterfield, Willa and Carlos were struggling while they took over Mariposa's work as a royal historian. Mariposa and Zee were invited to tea with the king, Catania and her pet Anu, but Mariposa didn't fit in and embarrassed herself.

In her dark lair, Gwyllion and her sidekick, Boris, perfected a magic spell that would change crystals into dark rocks. In the morning, Talayla invited Mariposa to meet the residents of Shimmervale, but they were all hiding. Carlos and Willa were still having trouble doing Mariposa's job in Flutterfield.

The next day, Talayla told Mariposa about the Crystal Ball and gave her a dress to wear. Mariposa went to find King Regellius to ask if she could address the subjects and tell them that the Butterfly Fairies wanted to send their best wishes to the Crystal Fairies. King Regellius accepted but, after a mishappening, told Mariposa harshly that her large wings were a menace. Mariposa folded her wings down, and was told to keep them that way.

The Gwyllion found out about the Crystal Ball and told Boris they would be leaving for Shimmervale to attack that night. Mariposa and Catania found out they had things in common, so Mariposa suggested they go to the GlowWater Falls after Catania said she hadn't been there in many years. They had an enjoyable time together, and Catania told Mariposa about her sad past; She revealed that, when she was eight years old, Gwyllion asked her father for one crystal. King Regellius refused so he wouldn't run out of crystals for his subjects. Gwyllion wanted revenge, so she tried to kidnap Catania, but dropped the princess and broke her wings. Even after her wings healed, Catania had been too fearful to fly since the incident.

Catania gives Mariposa a crystal necklace and Mariposa gave Catania a Flutter Flower as gifts. They then went to the Crystal Ball and, because Mariposa's wings were folded down, she couldn't fly and socialise in the air. Instead, she danced on the ground with Catania and everyone began dancing and having fun. However, one fairy noticed the crystal necklace around Mariposa's neck, and everyone assumed Mariposa had stolen it.

King Regellius banished Mariposa from Shimmervale, so she returned the crystal necklace and started going home. Catania was upset so she left with her pegasus Sophie, and Anu. As Mariposa was going back to Flutterfield, she saw Gwyllion, who used her magic staff to turn every crystal in Shimmervale to rock simultaneously. She then made every Crystal Fairies paralysed and tried to steal the Heartstone which would turn the kingdom to stone if tampered with. Mariposa tried to stop Gwyillion, but failed and was frozen. In the end, Catania gained the courage to fly and fight Gwyillion. Gwyillion's staff ended up broke on the ground.

Although the Heartstone was blackened and hard, Catania noticed that the Flutter Flower was glowing. Mariposa and Catania held the Flutter Flower next to the Heartstone and every Crystallite was restored. Their appearances transformed and they go to see the king, who wanted to destroy Gwyllion. Catania told him that all Gwyllion had asked for was one Crytallite, and while her reaction to not getting one wasn't justified, destroying her wouldn't be either. They gave Gwyillion one Crystallite, and her personality and appearance became less harsh. She said that she had a lot of thinking to do and left in peace.

King Regellius made peace with the Butterfly Fairies and gave Queen Marabella a crystal necklace as a gift. At the Ball in Flutterfield, Prince Carlos asks Mariposa for a dance and all the other fairies have fun and dance.

Starring The Voices Of

The following songs were written by Amy Powers, Gabriel Mann and Rob Hudnut and produced by Gabriel Mann: "Only A Breath Away", performed by Rachel Bearer, is the first song played when Mariposa and Zee go on the journey to Shimmervale and "Be A Friend", the film's theme song only played in the end credits, performed by Alana Hyland. Both songs were published by Mattel Rhapsody.

"Fly High" is the instrumental piece played when Mariposa, Catania and the other Crystal Ball guests dance on the ballroom floor. It was composed by Jeremy Peter Godfrey, Paul Dominic Plant and Ian Walsh. It was published by KPM APM courtesy of APM Music. 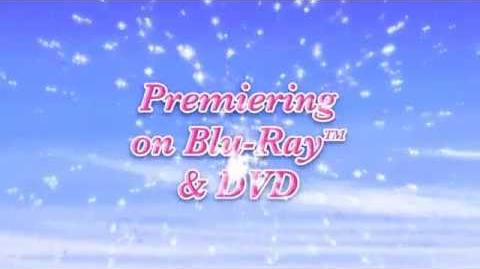 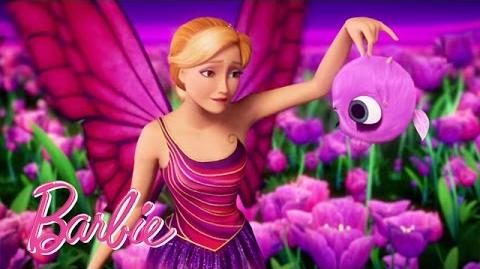 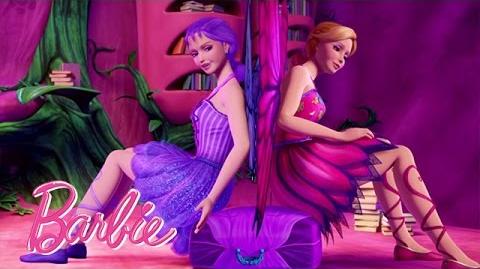