Barbie: Fairytopia is the 5th CGI film and the first Fairytopia film released on March 8, 2005. The film follows the story of Elina, a wingless fairy who goes on a journey to save the enchanted land of Fairytopia from the evil Laverna

"Just through the rainbow, in the world of Fairytopia, lives Elina, a beautiful flower fairy who longs to have wings."

"Her home is a large flower in the Magic Meadow where she lives with Bibble, a quirky but loveable puffball."

"One day, Elina wakes to find that her flower home is sick, and her fairy friends can't fly! She summons the courage to help and embarks on a fantastic journey to find Azura, a Guardian Fairy she thinks can solve the problem. She meets new people who test her courage and teach her the value of true friendship. But can a wingless fairy save all of Fairytopia?"

"Join Barbie, as Elina, in her first ever Fairytopia film and discover a magical land of fairies, flowers and enchanting experiences!"

Elina, a wingless flower fairy, and her puffball friend Bibble watch their fairy friend Dandelion fly with three pixies. The pixies make fun of Elina for having no wings, but Elina ignores their taunting. Dandelion, however, defends Elina by fluttering her wings so hard that the small pixies are blown away. They later come back to warn Dandelion and Elina to go home "where it's safe". This is so they don't get kidnapped by someone named Laverna (who is already rumored to have kidnapped a fairy named Topaz). Elina thinks that Laverna is a myth, but Dandelion is unsure so she goes home to ask her mother. Elina and Bibble go back to Peony, where her flower home is.

Elina talks to Bibble about what the pixies said, but she thinks Topaz is too powerful to get kidnapped, as she is a guardian. Bibble is asleep, and Elina is still feeling uneasy, but Peony plays a lullaby for her, and she falls asleep. However, Topaz really has been kidnapped by Laverna. Laverna plans to kidnap all of the guardians, and then take over Fairytopia. Laverna calls her minions, Fungus, who reveal Laverna's formula. It had the power to weaken every flying creature in Fairytopia if they breathed it in; they would become so weak they would lose the power to fly. As she speaks, Lavena's minions are in all seven regions of Fairytopia and unleashing the formula. She thinks no one can stop her, as she is the only one with an antidote. Her main plan is to give everyone the antidote, and then everyone will love her for it and let her be their queen.

In the morning, Bibble has to wake up Elina because Peony didn't sing to wake them up. Elina goes outside and sees that Peony, as well as all the other fairy homes, are sick. Dandelion comes to see Elina and tells her that some of the fairies are having trouble flying, and Topaz is gone; the closest guardian is Azura, and she is far away, in Fairytown. Elina thinks that she has to go to Fairytown to see Azura, but Dandelion doesn't think it is a good idea; Elina has never left the meadow before, and it takes hours to get to Fairytown, even if you have wings. Elina really thinks she can't actually get there, but Bibble and Dandelion volunteer to join her, and they leave the Magic Meadow.

The trio enter a spooky forest and Dandelion flies up high to see if she can see a way out. When she is higher up, she breathes in some of Laverna's formula and can't fly. Elina realizes that Dandelion is getting sick, and it would be too hard for Dandelion to walk like Elina, as Elina was used to walking. She urges Dandelion to go home before dark to avoid panicking her mother, so Dandelion leaves Elina and Bibble. Meanwhile, Laverna has kidnapped another guardian: Ruby. He remains loyal to the Enchantress, Laverna's sister, and the ruler of Fairytopia. Laverna shows Topaz and Ruby the state the Enchantress is in, and it turns out she is very weak because of the formula. Laverna urges Ruby to take advantage of her hospitality, like Topaz, who keeps eating food from Laverna.

Elina and Bibble get out of the forest and encounter a new place where all of the flowers are wilting. Elina jumps up to one of the highest flowers to get a view of the horizon. Bibble flies in front of a flower that is like a tunnel, so they go inside it. At the end of the tunnel is the City Hall of Fairytown, but it is closed. They tell the man there that they need to see Azura but she is not there. A pixie named Larkspur comes and the man working in the city hall tells him that Ruby, and another guardian named Amethyst, have been kidnapped. He has to find Azura immediately, so Elina and Bibble take advantage of this and follow him.

Elina and Bibble grab onto a flower and it floats after Larkspur, but they crash. They see Azura's house, but it is surrounded by guards. Elina and Bibble hide in a flower, but Azura spots them and tells them to leave. Elina tells Azura that they came all the way from Fairytopia, so Azura tells Elina to come closer. She sees a rainbow in Elina's eye for a second, and is shocked. She invites Elina into her house, and gives her food and shelter. Azura tells Elina that the rainbow in her eyes means she is destined for great things. When Elina goes to bed, Azura tells her that all of Fairytopia is in trouble and it is down to Laverna. In the morning she will leave to speak to a dryad named Dahlia, who lives in the Wildering Wood. Azura asks Elina to take care of her necklace.

In the morning, Azura wakes up Bibble and asks him to find Hue, who lives in the south; he needs to be given an important scroll. After that, Azura is about to leave but is kidnapped by Fungus. Elina looks outside when she wakes up and sees that the guards have been tied up. A stout fairy thinks Elina has caused the trouble, so Elina runs away and gets helped by Hue, who has large wings and carries Elina to the Wildering Wood.

In Laverna's lair, the Fungus arrive with Azura, and Laverna notices that Azura isn't wearing her necklace. The Fungus tell Laverna that wingless fairy had it. Laverna realizes that Elina wouldn't be affected by the forumla, as she couldn't fly. All of the Fungus are ordered to find Elina. Meanwhile, Hue tells Elina that after a day they will be in the Wildering Wood. However, they encounter some of Laverna's firebirds. To escape them, Hue flies off a rainbow colored waterfall into a cove. Hue disturbs some relaxing mermaids when he flies too low, including Prince Nalu.

Prince Nalu yells at Hue, but stops when he sees Elina. Hue insists that the firebirds won't come down as they hate water, but they do. Prince Nalu throws them some special seaweed that will let them breathe underwater, so they all eat some. They swim with Prince Nalu to safety and he points them to the Wildering Wood. The prince hopes he can see Elina again, leading to Bibble making fun of them. They get on Hue but he breathes in some of Laverna's formula and Elina orders him to land so he can rest. She asks Bibble to stay with Hue and she goes to find Dahlia by herself.

When Elina is by herself, she begins doubting herself and comparing herself to Azura, a great guardian. Some happy trolls appear who will lead Elina to Dahlia. They go a long way, but still only see sick trees. Azura's necklace starts glowing and it "calls" Dahlia. The happy trolls leave and Dahlia says she can't help Elina; she doesn't want to help the guardians as the last time she tried to help them, none of them believed she was good except for Azura, as she had been working with Laverna. Azura believed that Dahlia would know how to defeat Laverna because of this, but Dahlia doesn't want to risk herself for Fairytopia. Elina convinces her otherwise and they go back to Hue and Bibble. Hue and Bibble insist on coming with Elina and Dahlia and they start to go after Laverna.

In Laverna's lair, she has all the guardians kidnapped. Laverna places a crystal in her throne and the guardian's necklaces feel the presence of Azura's necklace, which is with Elina. Laverna knows she is near, so she orders the Fungus to get her. Dahlia tells Elina that, when she had left Laverna, Laverna had created a device that used the strength of her royal bloodline to suck the powers from the fairy guardian's necklaces, and transfer them to herself. She doesn't know how it works, but she knew that the "union point" would be the weakness.

The group arrives at Laverna's lair, and they can't go in the air because of the firebirds. Their plan is to go in and find the union point, but Elina wants to go by herself as she has Azura's necklace. While Elina is running over to the lair, she almost gets caught by the Fungus, but Hue flies in with Dahlia to distract them. When Bibble tries to distract them he is captured. Elina makes it to the lair, and Dahlia, Bibble and Hue have been brought to Laverna by the Fungus. When the Fungus leave, Elina finds them and tells Laverna to let them go. Laverna will only let them go if Elina gives her the necklace, but she refuses. Laverna sees the rainbow in Elina's eye, and tells her she could have wings if she went to Laverna's side.

With the wings Laverna gave her, Elina becomes brainwashed. Laverna tells Elina that, together, they can have what they want; Laverna will rule Fairytopia, and Elina will have wings, with everything in her world as she remembered it. Laverna tells Elina to put Azura's necklace around Azura's neck, and Elina will get everything she's ever wanted. The guardians' necklaces make them lose their powers and they start transferring to Laverna. Elina is just about to place Azura's necklace around her neck when Azura says, "for the friends you havn't met yet". This snaps Elina back to reality, and she sees that the union point is where the crystal is. She takes the necklace off Azura and throws it at the crystal, breaking it. The guardians get their powers back. Laverna, her throne, and her sceptre disappear, and Bibble, Hue, and Dahlia are freed. The guardians are safe.

Back in the Magic Meadow, the pixies are flying again, and everyone is glad to see Elina. Hue comes to see Elina, and so does the Enchantress. She thanks Elina and her friends for saving everyone, and says that even if Elina may not need a gift for thanks, she still deserves one. The Enchantress gives Elina a rainbow colored necklace and flies away. The necklace begins to glow and Elina is granted her wish of her very own pair of beautiful, pink wings. She flies with her own wings for the first time, and Elina, Dandelion, Hue and Bibble fly together off together. 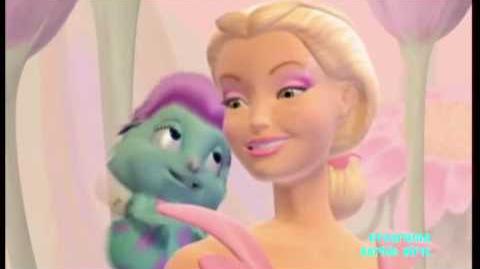 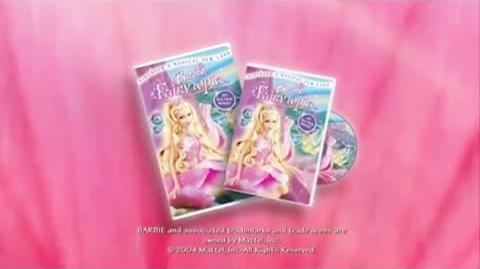 Barbie Fairytopia Movie Trailer
Add a photo to this gallery

Retrieved from "https://barbiemovies.fandom.com/wiki/Barbie:_Fairytopia?oldid=138840"
Community content is available under CC-BY-SA unless otherwise noted.