Barbie: A Fashion Fairytale is the 18th Barbie movie. It was released to DVD on September 14, 2010, and it made its TV premiere on Nickelodeon on November 21, 2010.[1] The film follows the adventures of Barbie as she visits her aunt, a fashion designer, in Paris, and has a magical experience.

"Join Barbie in a colourful, modern-day fairytale filled fashion, friends and fun. Barbie and her dog Sequin jet off to visit her aunt's amazing fashion house in Paris. Much to their surprise, it's about to be shut down forever!"

"After she discovers three enchanting Flairies with sparkle-magic powers, Barbie comes up with a brilliant idea to save the business. She even inspires Alice, a shy fashion designer, and together they create a dazzling runway fashion show!"

"Barbie shows that magic happens when you believe in yourself."

During a movie shoot for "The Princess and the Pea", Barbie is fired by the director for expressing her personal opinion. To make matters worse, Spencer posts in the blog about Barbie getting fired, and Ken calls her on the phone and breaks up with her. Barbie decides to get away by going to Paris and visiting her Aunt Millicent, a fashion designer. While Barbie is on the plane, Ken is helping Barbie's ex-best friend Raquelle practice lines for her drama class. After a confrontation with Barbie's friends Teresa and Grace, who thinks Ken dumped Barbie for Raquelle, he is confused. However, one of the lines he recorded for Raquelle was about breaking up with someone, and he realizes that Raquelle sent it to Barbie. To make sure Barbie understands what happened, Teresa and Grace tell him to make a 'grand romantic gesture'. Ken decides to go to Paris to surprise Barbie, so he books a flight.

Meanwhile, in Paris, Barbie finds her Aunt Millicent's fashion house and discovers that she's closing down and moving to the country due to being unsuccessful. Barbie meets Aunt Millicent's assistant, Marie-Alice, who is a great designer but is shy. She has many designs, which are enhanced by the flairies: Shimmer, Glimmer, and Shine. They can enhance clothes by giving them glitter and put them in the Glitterizer, a wardrobe with their magic in it. The outfits turn into a success.

They decide to host a fashion show on Friday night to raise enough money to buy Aunt Millicent's fashion house back from a Hot Dog company. However, across the street from Millicent's is Jacqueline with her assistant Delphine, rivaling fashion designers. When they see the Flairies, they plan to kidnap Shimmer, Glimmer, and Shine. When Barbie and Marie-Alice discover that the Flairies are gone, Millicent decides to help with the fashion show, and they worked through the night to create a line of beautiful dresses.

On Sunday night, Jilliana, Jacques, and Sequin, Millicent's and Barbie's pets, see fireworks that the Flairies made and rescue them. The Flairies transform the studio and glitterize the outfits completing the last preparations for the fashion show. A lady orders ten thousand pieces from the fashion line, and Millicent is able to buy the fashion house back. Glimmer, who always struggled with her powers, transforms Barbie's final outfit into a glittering three-tiered pink gown. Better yet, Ken arrives and tells Barbie that it was Raquelle who sent her the message about him breaking up with her. Ken informs Barbie that he loves her for who she is and not her career. They share a passionate kiss. Lilliana Roxelle, Paris's top fashion critic, congratulates them on a spectacular show and invites them to her Pink, White, and Black party that night. Glimmer harnesses her magic a second time and transforms the limousines into beautiful stagecoaches. The film ends after the director of "The Princess and the Pea" rehires Barbie.

Jacques first sees Sequin when she wakes him up. He falls in love with her straight away and wants to use her as his fashion muse. Even though Sequin crashes into him, he apologizes to her and introduces himself. He helps her up, and they get acquainted. Jilliana makes fun of Sequin's style, but Sequin defends herself and says she is honored to be Jacques' muse. They run off happily, leaving Jilliana.

Jilliana can't help rolling her eyes at Jacques' huge crush on Sequin. While she is happy that Sequin inspires Jacques to design again, she thinks all the romance is gross. Later in the film, after Jacques shows his first design on Sequin, he talks to her, saying how much she inspires him. They lean in to touch noses only to be interrupted by Jilliana, apologizing for her remarks about Sequin.

At the end of the film, Jacques takes part in the fashion show (walking on the catwalk to "Who Let The Dogs Out") and swaggers up to a statue thinking that it's Sequin. He strokes its paw but Sequin then comes up from behind and he notices her. Jacques chuckles, puts a rose in his mouth, and leans on Sequin.

Other characters include Nikki.

This is the list of the songs which were featured in the film: 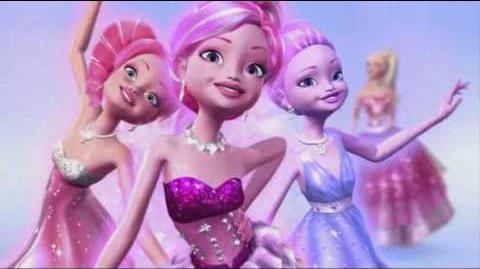 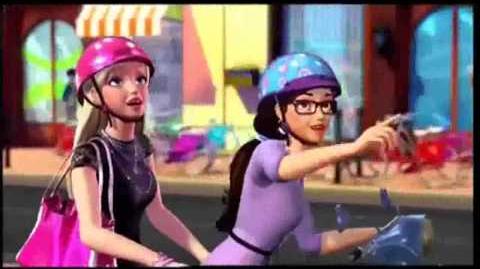