Barbie A Fairy Secret is the 19th Barbie movie. It was released to DVD on March 15, 2011, and it made its TV premiere on Nickelodeon on April 17, 2011.[1] When Ken is kidnapped by fairies, Barbie and her ex-best friend Raquelle have to team up to save him from being married to a fairy princess and being trapped in a fairy world forever.

"Get ready for Barbie™: A Fairy Secret, an amazing adventure with Barbie™ where she discovers there are fairies living secretly all around us! When Ken™ is suddenly whisked away by a group of fairies, Barbie’s two fashion stylist friends reveal they are actually fairies and that Ken™ has been taken to a magical secret fairy world not far away!

Barbie™ and her ex-best friend Raquelle take off with the fairy friends on an action-packed journey to bring him back. Along the way, they must stick together and learn that the real magic lies not just in the fairy world itself, but in the power of friendship."

Barbie is at the première of her latest movie when her co-star and ex-best friend, Raquelle, steps on her dress, ripping it. Her stylists, Carrie and Taylor, secretly being fairies use magic to mend it, confusing Barbie. Crystal, another fairy, greets Carrie and Taylor and goes back to Gloss Angeles, taking one final picture of Ken.

The next day at Wally's restaurant, Barbie confronts Raquelle. While the two are arguing, Princess Graciella, Crystal, and Graciella's assistants show up and kidnap Ken. Carrie and Taylor sprout their wings and attempt to stop the Princess from taking Ken, but the portal to Gloss Angeles closes before they can enter it. The stylists attempt to dissuade Raquelle and Barbie of the fact that they just saw fairies, but admit their existence. Carrie and Taylor tell Barbie and Raquelle they have to get Ken back because if a human marries a fairy, they can never return to their world. Meanwhile in Gloss Angeles, Ken and the Princess arrive in the royal palace, where they meet Zane, Graciella's boyfriend. Zane is outraged, at Graciella's new love interest challenges Ken to three duels.

Barbie, Raquelle and the fairies go to a clothing store, where they enter the Flyway (a fairy method of transport), teleporting to the top of the Eiffel Tower in Paris. The fairies reveal that Lilliana Roxelle, a fashion critic from the previous movie, is the oldest and wisest fairy living on Earth. They arrive at Lilliana's house, stating their problem. Lilliana reveals that Graciella must be under a love potion, which adds red to the eyes. She gets a vial of antidote for the love potion, gives it to Barbie, and lets them use her portal to Gloss Angeles.

They arrive in the fairy city, an island floating in the sky. The fairies take them to Wings and Things, a store that sells clip-on wings for human use. Barbie proves to be good at flying which sparks Raquelle's jealousy. The four girls then set off to the palace, the highest point in the city. Meanwhile in the palace, the first phase of the duel between Ken and Zane begins- Ken can’t cast any spells, but he cleverly avoids all of Zane's magic blasts.

Barbie and her friends continue flying up to the palace, and come across some pegaponies, colored, flying horses that fly them the rest of the way. When they near the palace, the group encounters several swirlnadoes, tornadoes that will make even the best flyer lose their balance. Barbie points out Raquelle's skill with horses, to the latter's surprise. Raquelle successfully guides them through the swirlnadoes, and they sneak into the palace disguised as chefs

Once inside the palace, the four locate Graciella, Ken and Zane. Barbie flies in front of Ken to stop Zane from blasting him and Barbie attempts to give Graciella the love potion antidote, but the Princess freezes her, Raquelle, Ken, Carrie and Taylor. Crystal reveals that Carrie and Taylor are in the palace, and Graciella (who previously banished them) send the four to the dungeon by trapping them in Fury Spheres which is said to be escape proof.

The wedding begins, as Barbie and Raquelle sit down and talk, finally getting the bottom of their rivalry and misunderstanding. They apologize to each other and promise to try and put their differences aside. Their forgiveness transforms the spheres into real wings for them, because forgiveness lets you fly. The two fly up to the grand hall to rescue Ken with their new wings. They stop the wedding just in time, revealing to the public that the Princess is under the influence of a love potion. Raquelle distracts the assistant fairies while Graciella battles with Barbie.

Barbie finally releases the antidote over Graciella's head, curing her of the love potion. The Princess confronts Carrie and Taylor, who reveal that they spend time without her cause she so was busy with royal duties. The three forgive each other and become friends again. Crystal reveals that she made Graciella fall in love with Ken so she could get Zane's attention. Graciella, confiding to Crystal that the ordeal was all her fault, sentences her to clean the entire palace after the wedding reception, stating that she and Zane were to get married.

Graciella tells Barbie and Raquelle that their wings will disappear when they go back to the human world, and then reappear when they return to Gloss Angeles. But Raquelle did not promise Graciella that she'll keep Gloss Angeles and fairies existence a secret. Thus, the fairies blow a magic sleeping dust on them. The next morning, Barbie wakes up with no recollection of Gloss Angeles or the fairies, thinking it was a dream. However, she and Raquelle are now trying to get along. Carrie and Taylor tell the two that they reconnected with an "old friend" (Graciella) and are going back to their "home town" (Gloss Angeles).

Clothes from Fashion Fairytale can be seen 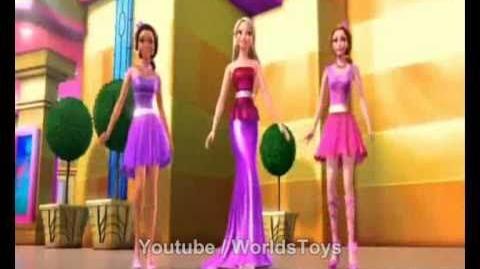 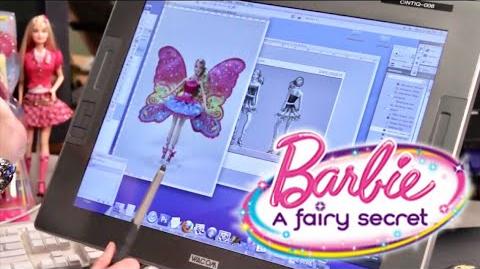 The Making of Barbie A Fairy Secret