Ambassador Kattrin is a character in Barbie in A Mermaid Tale 2. She is from the Indian Ocean and she travels to Aquellia to see the Changing of the Tides Ceremony. Kattrin is the fastest mermaid in the ocean. She is voiced by Kira Tozer.

Kattrin comes to Aquellia with the other three ambassadors. She spins around and speaks very quickly to Queen Calissa.

While preparing the throne room, Eris came with some (possibly) ray eels, when Calissa and the other ambassadors attacking her. Kattrin got cursed to have her worst nightmare, being very slow. Later, the ambassadors trapped in a medium-light coral patterned shell that is being guard with the eels.

When Princess Merliah came, Zuma and Snouts helped the four ambassadors escape the shell by pushing it, which the eels have been riding/used by Merliah and Kylie. They later helped Merliah gets to the throne, which she is, and later frees every mermaid that cursed escaped from the curse.

The four ambassadors later took Eris into a very "nice" place, so she couldn't get out and won't be free.

Kattrin is joyful, cheerful and energetic mermaid and is the fastest mermaid in the ocean. When she is cursed by Eris, she was very slow and rarely spoke.

The doll of Ambassador Kattrin

The doll of Ambassador Kattrin in the box

Kattrin cursed to be slow

the ambassadors with Kylie 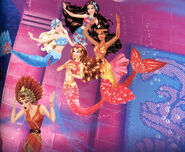 Freed ambassadors and cursed Eris
Add a photo to this gallery

Retrieved from "https://barbiemovies.fandom.com/wiki/Ambassador_Kattrin?oldid=135898"
Community content is available under CC-BY-SA unless otherwise noted.